The Beginner’s Guide to Classic Films and Their Directors: Part Three In the first two installments of this series, I discussed filmmakers who primarily worked, or work, in the United States. Part One, in August, covered Woody Allen, Frank Capra, Charles Chaplin, and Francis Ford Coppola. Part Two, in September, included John Ford, Howard Hawks, Alfred Hitchcock, Billy Wilder, and condensed coverage of 17 other directors. As promised, in this installment I talk about some of the world’s finest directors who have operated primarily outside North America.

As Hollywood’s artistic and commercial powers grew, many foreign directors ended up working in Hollywood. Power-hungry politicians are always afraid of artists, and many of America’s finest directors were refugees from fascism, communism, and other forms of dictatorship. So how to choose which directors go in what list? And how to choose who should be included, who left out?

By their very nature, lists of “the greatest” in any field are subjective and idiosyncratic, and my choices are not what is taught in film school. If you want to familiarize yourself with the conventional wisdom about the great directors and the great films, the best resource in the English language is the venerable poll published in Sight & Sound, the scholarly journal of the British Film Institute. Each decade since 1952, S&S has sent questionnaires to the world’s best film critics, asking them to name the Greatest Films of All Time. Later, they asked critics to name the Greatest Director, and also began asking directors to answer the two questions. Statisticians will see a few problems with such lists right away. First, if a director made just a handful of great movies, then his or her top film will get lots of votes; e.g., Orson Welles’s Citizen Kane. If a director made dozens of classics, then each film will cannibalize votes for the other; e.g., John Ford, Alfred Hitchcock, Howard Hawks.

The Beginner’s Guide to Classic Films and Their Directors: Part Two 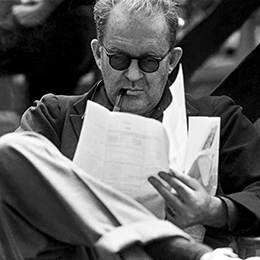 Welcome to the conclusion of this two-part series. In last month's installment, I began with Woody Allen, Frank Capra, Charles Chaplin, and Francis Ford Coppola. As great as that list was, this month’s is even better -- on it are the names of those directors who were, arguably, most consistently excellent: John Ford, Howard Hawks, Alfred Hitchcock, and Billy Wilder.

John Ford: John Ford is often mentioned as the greatest director in history, and you can count me in on that assessment. I was trying to explain this to my nephew and brother-in-law, and while they knew of Ford, they had no deep understanding of what he means to film. I began with his Westerns. Ford made dozens of them, but seven stand out as some of the best pure cinema ever made: The Searchers, Stagecoach, My Darling Clementine, The Man Who Shot Liberty Valance, and Ford’s Cavalry Trilogy: Fort Apache, She Wore a Yellow Ribbon, and Rio Grande.

The Beginner’s Guide to Classic Films and Their Directors: Part One “So, Uncle Wes, I was trying to find some good movies to stream on Netflix,” says my nephew Martin, who knows I write about classic films. “The other night I watched Once Upon a Time in the West and I loved it!”

“Are you kidding?” I ask. There’s a sudden lump in my throat. He’s made a breakthrough. Thank God. “With the exception of Ford and Hawks, Sergio Leone was probably the best director of Westerns of all time, and that is his masterpiece.” (Note: On reflection, maybe I’d add Anthony Mann to that list as well.)

“Well, I usually don’t like Westerns,” he said. Damn, there goes his breakthrough. “The problem is, there’s never enough dialogue, and I like intelligent dialogue.”

OK. He needs the full Monty here. “You’ve been watching the wrong Westerns,” I say. “It’s certainly true that Leone kept the dialogue minimal, but he carries the action in the movie’s rhythm and visuals. Let’s take another director, Howard Hawks. No one packs a movie with more dialogue than Hawks. He has so much going on he has people talking over each other.”

Nephew wants to know what Westerns this guy Hawks made. OK. “Red River, Rio Bravo, Rio Lobo, and The Big Sky would give you a few to start with. Then there’s John Ford, God bless him, maybe the greatest director in history. He throws in so many sly asides that you have to keep listening every second lest you miss a hilarious zinger. I mean, you’re talking about two of the five or ten best directors in the history of film!”

“So who would the others be?” he fires back. “Would you include John Woo?” “Lola Montès is in my unhumble opinion the greatest film of all time, and I am willing to stake my critical reputation, such as it is, on this one proposition above all others.”
-- Andrew Sarris, Village Voice, 1962

We all love a snarling fight, and few films in history have created such a feud as Lola Montès. Back when the New York City film critics wielded the ultimate power in world cinema, Sarris’s statement created an uproar heard around the world. Since few people had ever seen the film, the first reaction was to generate high expectations and a groundswell of ticket sales for its showing at the New York Film Festival.

"Spirited Away" ("Sen to Chihiro no kamikakushi") Decembers are always a good time for family films -- nothing brings the family together like the holiday season. The problem is finding a film that can appeal to all ages without "corrupting" the youth or exasperating anyone older than 13. There aren’t many. Blame the children’s entertainment industry.

Children are an easy target for sloppy artists. For proof, take one look at the wasteland of Saturday-morning TV. Of course, as long as the TV keeps kids immobile and quiet, most parents are happy with the results. Making an adult sit through these shows would feel similar to a half-hour of waterboarding.

"The Thing from Another World" Director Howard Hawks was in a PX in Heidelberg, Germany, in 1948, waiting for a scene setup during the filming of his I Was a Male War Bride. He picked up a copy of Astounding Science Fiction Magazine, and started reading a reprint of John W. Campbell’s 1938 novella, Who Goes There? Hawks got lost in this story of a group of scientists stuck on a remote outpost in Antarctica. When they discover a long-buried spacecraft under the ice, they try to blast it out but destroy the ship. However, they are able to rescue a . . . thing:

"The broken half of the bronze ice-ax was still buried in the queer skull. Three mad, hate-filled eyes blazed up with a living fire, bright as fresh-spilled blood, from a face ringed with a writhing, loathsome nest of worms, blue, mobile worms that crawled where hair should grow."

Luckily for the Thing, it didn’t have to live out its life with wormy hair. It could shape-shift at will, and take over other living organisms. The terror in Campbell’s story is ratcheted up by the characters’ -- and the reader’s -- not knowing who is human and who is an alien in human form. George Gershwin’s music blares across the speakers, and in black-and-white photography unmatched since Citizen Kane, New York City blazes across the screen with more sex appeal than a slow, meandering shot of a lightly sweatered 1930s starlet. It looks as if Woody Allen has created a love story for his hometown. Then we hear Allen’s deadpan voice:

"‘Chapter One: He adored New York City. He idolized it all out of proportion.’ Uh, no, make that: ‘He, he romanticized it all out of proportion.’ Yes. ‘To him, no matter what the season was, this was still a town that existed in black and white and pulsated to the great tunes of George Gershwin.’ Eh, no, missed out something. ‘Chapter One: He was too romantic about Manhattan, as he was about everything else. He thrived on the hustle and bustle of the crowds and the traffic. To him, New York meant beautiful women and street-smart guys who seemed to know all the angles.’ No, no, corny, too corny for a man of my taste. Can we, can we try and make it more profound? ‘Chapter One: He adored New York City. To him, it was a metaphor for the decay of contemporary culture. The same lack of individual integrity that caused so many people to take the easy way out was rapidly turning the town of his dreams into --’ No, that’s a little bit too preachy. I mean, you know, let’s face it -- I want to sell some books here. ‘Chapter One: He adored New York City, although to him it was a metaphor for the decay of contemporary culture. How hard it was to exist in a society desensitized by drugs, loud music, television, crime, garbage --’ Too angry. I don’t want to be angry. ‘Chapter One: He was as tough and romantic as the city he loved. Behind his black-rimmed glasses was the coiled sexual power of a jungle cat.’ I love this. ‘New York was his town, and it always would be . . .’" When, in his inaugural address, President Barack Obama said that, "Starting today, we must pick ourselves up, dust ourselves off, and begin again the work of remaking America," I had this crazy fantasy that someone was about to break into song: "Pick yourself up, dust yourself off, and start all over again!" It would have been appropriate. Nor is it possible to imagine that the President and his speechwriter, Jon Favreau, both of whom are very bright, would not have known that the line might resonate even with people who had no idea that "Pick Yourself Up" was written -- in 1936, by Jerome Kern and Dorothy Fields -- in hopes that it would encourage Americans to keep their chins up in the depths of the Great Depression.

And boy, do we need it now. Which makes it the perfect time to go back and watch Swing Time, the film for which Kern and Fields wrote that song. Fasten your seatbelts, it's going to be a bumpy night!
-- Margo Channing

In 1950, the unheard-of happened. One film was nominated for a record-breaking 14 Academy Awards, eclipsing Gone With the Wind’s previous high mark of 13. That film, All About Eve, would hold the record for 47 years, until Titanic tied it. No film has ever surpassed it. Since this is Academy Award month (March 24th on ABC), All About Eve is relevant. Plus, it is a fabulous bitch-fest of a film.

What led me to all this Oscar research was the announcement that The Lord of the Rings had collected a notable 13 nominations for Academy Awards. I knew that was one of the highest, but I had to go check my books to see which film had the most nominations. As it turns out, The Lord of the Rings placed in the top nine honorees of all time.* But I had honestly forgotten that All About Eve was at the top. Truth be told, many people tend to forget how brilliant a film it is.