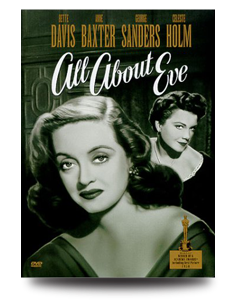 Fasten your seatbelts, it's going to be a bumpy night!
-- Margo Channing

In 1950, the unheard-of happened. One film was nominated for a record-breaking 14 Academy Awards, eclipsing Gone With the Wind’s previous high mark of 13. That film, All About Eve, would hold the record for 47 years, until Titanic tied it. No film has ever surpassed it. Since this is Academy Award month (March 24th on ABC), All About Eve is relevant. Plus, it is a fabulous bitch-fest of a film.

What led me to all this Oscar research was the announcement that The Lord of the Rings had collected a notable 13 nominations for Academy Awards. I knew that was one of the highest, but I had to go check my books to see which film had the most nominations. As it turns out, The Lord of the Rings placed in the top nine honorees of all time.* But I had honestly forgotten that All About Eve was at the top. Truth be told, many people tend to forget how brilliant a film it is.

This is the story of a group of friends, all involved in the "Theater." Margo Channing (Bette Davis) is the grand diva of the stage, albeit an aging one at 40. Eve Harrington (Anne Baxter) is a young, starstruck sycophant who might have something up her sleeve. Addison DeWitt (George Sanders) reflects the archetypal ultimate slimeball, the single most vilified viper in the weeds of the world of theater -- the critic. Writer Lloyd Richards (Hugh Marlowe) and his wife Karen (Celeste Holm) are Eve’s biggest supporters. Margo’s younger boyfriend and director, Bill Sampson (Gary Merrill), reveals a noble love for Margo. Birdie Coonan (Thelma Ritter) offers the only foil to Margo’s pomposity. Finally, Claudia Caswell (Marilyn Monroe) is the classic bimbo only too happy to sleep her way to the top. 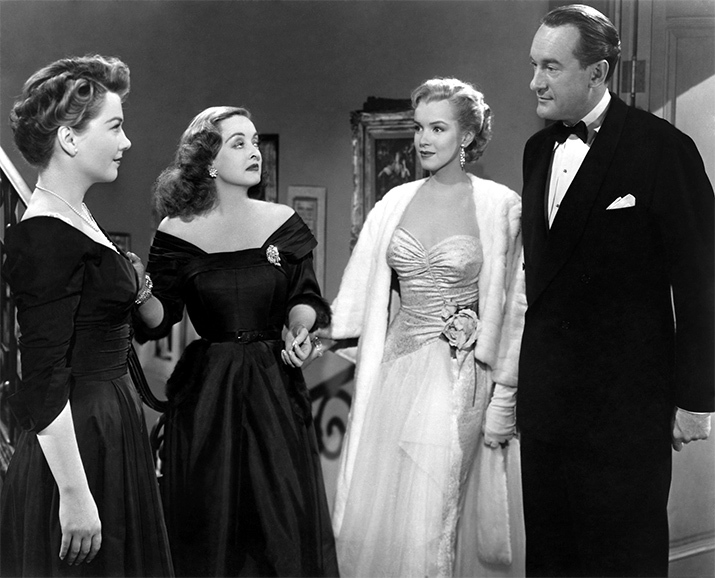 The story is simple. It starts with Eve winning an acting award, and then it drops into a two-hour flashback. Eve shows up every night for Margo’s new hit play. All she wants in life is to meet her idol. Karen Richards takes pity on her and introduces her to Margo. Everyone feels sorry for Eve and they adopt her as sort of a gopher mascot. As time goes on, Margo starts to feel like Eve is out for more than hobnobbing with the glitterati. No one else sees it. Is Margo right or is she just being a yob? Is Eve really the sad and pathetic little fan or is there more to her? For those who haven’t seen All About Eve, I won’t give it away. I will tell you that what starts out as a sarcastically funny film becomes something much deeper. And by the end, when we return to Eve’s home after the awards ceremony, the entire film takes on a sad and creepy tone that sticks with you.

Joseph L. Mankiewicz both wrote and directed All About Eve. As with some of his other films (A Letter to Three Wives, People Will Talk, The Barefoot Contessa), All About Eve is packed with more high-speed witticisms and sarcastic ripostes than you could possibly keep up with. He also gives us some of the meanest and bitchiest dialogue ever written. Then, just when you think we are going to be in for a two-hour character study, Mankiewicz throws in enough narrative twists to make you marvel at his plotting.

And like a master storyteller, Mankiewicz throws in several universal truths and dilemmas to keep you thinking about parallels and associations: like Margo’s overwhelming fear of becoming old and forgotten, the dangers of having your bad deeds revisit you, or how when you take up with treacherous friends, you may have treachery done to you. Without ever drawing our attention to it, he even enters the moral fray of whether it is more honest to screw or be screwed.

As a director, Mankiewicz shows a keen visual sense. Through most of the film, there is nothing showy. Everything is placed just right. Then at the end, he does a trick with mirrors that is as evocative as anything you would find in the French New Wave. Those of you who read this column regularly will know that I am a subscriber to the rule that when one or two actors are great, it’s the acting. When all are great, it’s the directing. In All About Eve, all the actors are great.

As good as the cast is, there are three clear standouts. Bette Davis had been the number one box-office star during the 1930s, but then she fell out of favor in the '40s. By the time she got the role of Margo, she was something of a has-been. She hadn’t even been picked for the movie! Claudette Colbert was to be Margo, but she slipped a disc in her back and was unable to take the role. Lucky for us. She couldn’t have flaunted the wildly uncontrollable firepower juxtaposed with aching vulnerability that Davis fashioned.

George Sanders was an odd bird. He was perfect for the snide and wicked columnist. His jaded affect, spouting Mankiewicz’s barbed critiques, was a thing of beauty. He may not have had to act too hard. He had always told his close friend, David Niven, that he intended to kill himself when he turned 65. True to his word, during his 65th year, Sanders overdosed on Nembutal. You can imagine Addison DeWitt leaving the note that Sanders himself left:

"Dear World, I am leaving because I am bored. I feel I have lived long enough. I am leaving you with your worries in this sweet cesspool. Good luck."

The third great performance slips by so quick you might not notice it. Marilyn Monroe, in one of her first film performances, literally lights up the screen. Just try to avoid watching her every move while she is on the set. You can see why she was one of Hollywood’s most famous stars within three years. 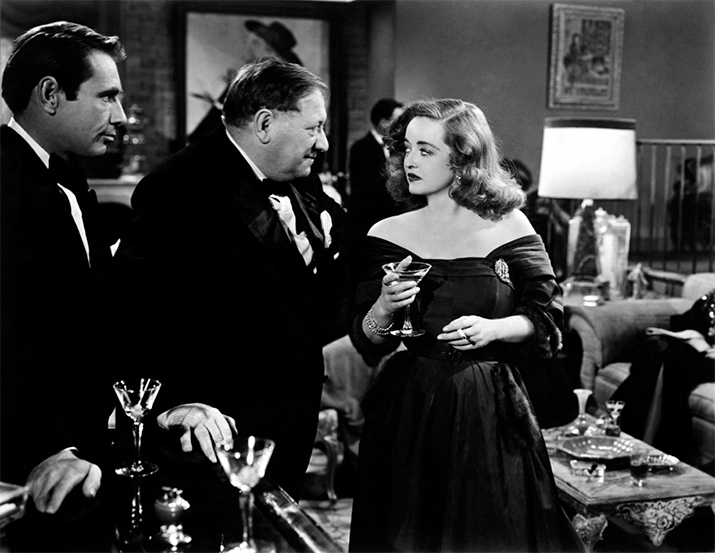 After receiving 14 nominations, All About Eve only took home six. In one of the most bitter ironies in all of moviedom, Davis and Baxter ended up nominated for the same Best Actress award. Lovers of the movie ended up splitting their votes and Judy Holliday won for Born Yesterday. Bette Davis was robbed. Thank goodness the Academy recognized George Sanders (Best Supporting Actor) and Joseph Mankiewicz (for both writing and directing). All About Eve also won the Best Picture award.

By the way, try to watch this film before the Academy Awards. Seeing Eve’s acceptance speech will make you wonder about the behind-the-scenes antics of some of the award winners.

Twentieth Century Fox Home Entertainment has taken this classic and given us nothing other than the film, a few pictures of the cast, and a trailer. To give you an idea of how lame the release is, under the section titled Bonus Features, they list "Aspect Ratio 1.33:1." Wow! Thanks dudes. Here is the most highly nominated film in history, and we get no extras. Makes you wonder what they are thinking. I just don’t get it. The picture quality is nothing to rave about either. It tends to be grainy, especially when compared to a perfect remastering like Citizen Kane.

But don’t let that stop you from seeing All About Eve. It is a classic.

* The others were All About Eve and Titanic with 14 and Gone With the Wind, From Here to Eternity, Mary Poppins, Who’s Afraid of Virginia Woolf, Forrest Gump, and Shakespeare in Love, all with 13 nominations.