"Close Encounters of the Third Kind" 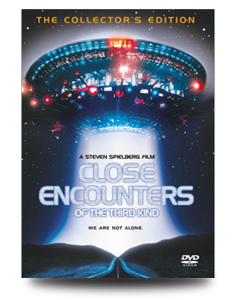 Mid 1977: Erstwhile TV director Steven Spielberg’s second movie, Jaws, had been a huge hit. He is in the finishing stages of Close Encounters of the Third Kind, prepping it for a summer-1978 release. The cash-strapped Columbia executives come to Spielberg and direct him to get the movie out by Christmas. They tell him that without the movie, Columbia will crash. Thirty-year-old director Steven Spielberg is given the task of saving the studio.

November 16, 1977: The marquee says, "WE ARE NOT ALONE." We are standing in line to see Close Encounters of the Third Kind at the Medallion Theater in Dallas. It is a brilliant story about a man who witnesses a UFO. He descends into an obsessive neurosis that causes him to lose both his job and his family, and yet he is ultimately redeemed by the truth. It is the first time any of us can remember seeing a movie about beneficent aliens. We have never seen such spectacular special effects, not even in that little movie that came out six months earlier called Star Wars. We know nothing about the rush to release or Spielberg’s desire to have more time to work on it. To us, it’s not a second rate movie but a minor masterpiece.

Mid 1979: Spielberg has just finished work on 1941. He tells the Columbia execs that he wants to go back and fix Close Encounters, to make the movie the way he had intended. They agree, but only on the condition that he adds scenes inside the Mother Ship so they can have a marketing angle for the film’s re-release. Spielberg makes a bad decision and agrees.

1980: Close Encounters of the Third Kind: The Special Edition is released. Spielberg proclaims that The Special Edition is the only valid version and that the 1977 version was simply a work in progress. The additions are mostly valuable. Roy Neary (Richard Dreyfuss) becomes a much more focused character whose maniacal fixation on an odd shape adds a much-needed edge to the film. Unfortunately the new ending is a disaster that completely destroys the mystery and extinguishes the magic. We don’t know that he has been forced by the bigwigs to screw up his movie. We think this is his artistic choice, and a bad one.

1981-1992: Our only real choice is The Special Edition. Apart from a few special showings on TV, the original version is kaput.

1992: Criterion releases the original version (finally!) on laserdisc. At last I can see the film without the new ending.

2001: The sixth and best version is now out. No longer a minor masterpiece, it is now a bona fide tour de force. It has Spielberg’s (supposedly) final thoughts on the film. The number of changes is beyond the scope of this article, but, for me, Spielberg has made every change I could have hoped for. He has kept the best parts of both versions and disposed of the worst. Apparently Spielberg has finally come to his senses over giving in to the producers: "I compromised and had Richard Dreyfuss walking inside the Mother Ship, which I never should have done because that should have always been kept a mystery," he says. Amen.

What makes Close Encounters of the Third Kind great

Special effects: When Spielberg first saw Stanley Kubrick’s 2001: A Space Odyssey, the quality of the effects intimidated him. He decided to go to the man who delivered for Kubrick, Douglas Trumbull. When he was 26 years old, Trumbull developed the "slit-scan" machine that gave us the psychedelic light show at the end of2001: A Space Odyssey. For Close Encounters, he developed shaft encoders that digitally stored camera movements with the live action so the exact movements could be recreated with models. This finally allowed the space ships and the humans to really appear together. To get an idea of how monumental this is, watch an older sci-fi movie and note how they have to leave the camera cemented in one spot to add models. Trumbull and Close Encounters freed the camera to move, making the illusions much more realistic. 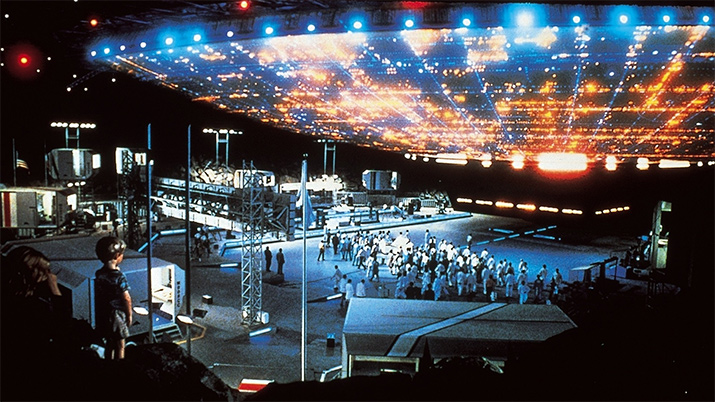 Music: John Williams’ score for Close Encounters inhabits an entirely different artistic plane than his other big score of 1977, Star Wars. Here, we have the music taking a central role in the development of the film, the modus operandi for communication between aliens and humans. The scope of this music is also broader. Consider the opening crescendo (heard thousands of times as demo music in the stereo shops of the day); the savage Penderecki-like motifs when the aliens first appear; the aleatory music in preparation for the arrival of the Mother Ship; and, most of all, the music during the scene where the Mother Ship and the humans are learning to communicate. Williams has been nominated for 39 Academy Awards, winning five times. A good case can be made that the Close Encounters score is the best of the lot.

Acting: Richard Dreyfuss won a well-deserved Best Actor Academy Award in 1977. The only problem is, it was for The Goodbye Girl. Close Encounters is a better piece of work. Take a look at chapters 12 and 13 to see a spellbinding actor portray a man struggling to keep a tenuous grip on his sanity. Teri Garr’s portrayal of Dreyfuss’ wife gains immeasurably from the new DVD. Now that we see how crazy he really was, she sounds less whiny and more supportive. Supporting actor Bob Balaban, a veteran of over 50 films, is excellent as a cartographer enlisted to support Claude Lacombe (François Truffaut) simply because he can speak French. And Spielberg had the guts to cast the French New Wave’s greatest director to act in his movie. This is a little like Bryan Singer (The Usual Suspects, X-Men) convincing Martin Scorsese to act in his next flick. It was very bold and bordering on hubris, but Spielberg pulls it off with Truffaut, bringing out a performance of remarkable humanity.

Steven Spielberg: At the ripe old age of 54, Spielberg has produced 70 films and directed 20 features. He has learned to play our emotions like Eric Clapton plays a Stratocaster. Watch in chapter 13 as Spielberg teases us with the image of the mountain on the TV. You can’t help but want to scream to Dreyfuss as his fixation shows up on the screen, but he doesn’t see it. Take note of how he directs young Barry (beautifully played with wide-eyed amazement by Cary Guffey) and imagine trying to bring off that performance from a three-year-old rookie. Best of all is the restored ending. Beginning at chapter 19 as the Mother Ship approaches and continuing through the end of the film, we are literally held spellbound. It is bravura directing, a manifesto for what was to come in the career of our most successful director. In the intervening years, Spielberg has put out some wonderful movies (Raiders of the Lost Ark, E.T. ), and some seriously flawed and/or preachy films (1941, The Color Purple, Hook, Amistad). Saving Private Ryan and Schindler’s List may have had important messages, but as pure film, in my opinion, Close Encounters is (to date) his magnum opus.

First of all, this release looks fantastic. Colors are rich and accurate. Dark places (and there are a lot) come across perfectly. If you want to see whether that new TV you are looking at conveys a full palette of blacks, check out chapters 9 and 10. Look for shadows in the folds of the clothes and details in the fabric. For a sense of scope, check the Mother Ship as it arises from behind Wyoming’s Devil’s Tower in chapter 22. The detail is astonishing. In fact, the scenes with the alien crafts look more real than most of the CG we see today. Sonically, the studio orchestra sounds are magnificent. We also have shake-the-wall bass, courtesy of all the alien ships. If you have DTS available, use it. The sound is exceptional. It is pristine with the sense of being in the same sound space as the action. The Dolby Digital is good but slightly distorted in the peaks.

Columbia actually gives us more extras than movie. But I’m not complaining. I loved the 1998 documentary “The Making of Close Encounters of the Third Kind.” Other than the cheesy inserts between chapters, this is the very model of what a behind-the-scenes look should be. Dreyfuss tells us how he pushed Spielberg to cast him. Trumbull talks about how he created the motion-control effects. Spielberg talks about the pressure to add the entry into the Mother Ship for The Special Edition. It goes on for 140 minutes, and I wasn’t bored for one single second. We also get eleven deleted scenes, including the entry to the Mother ship (if you are so inclined). There is no commentary track (something I would have loved), but you get most of the info in the documentary. Optimode, as always, is a welcome addition.

In short, Close Encounters of the Third Kind belongs in every serious film collection.