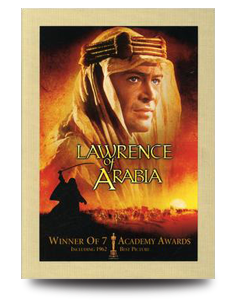 World War I. T. E. Lawrence (Peter O’Toole) is stuck with a desk job in Cairo, coloring maps. Something of a scholar, he believes that the Arabs are potential allies in the struggle against the Axis powers. His commanding officers think he’s daft, unpleasant, impolite, and not at all a proper gentleman. Happily for Lawrence, Mr. Dryden (Claude Rains), from the political team wants to assess the value of utilizing the Arabs. Lawrence is seconded to the politicos to search out Prince Feisal (Alec Guiness) and determine whether the British can enlist the Arabs. Lawrence falls in love with the desert and the Beduin lifestyle ("going native" as the officers referred to it) and decides that he will deliver an independent Arab republic to his friends. While his overt strategy is to overthrow the Turks, his covert mission is to beat the Brits. Being an intelligent and sensitive man, he falls victim to hubris. In the chess game of life, Lawrence’s fundamental aspiration was to be a knight; he unexpectedly grew to be a king, but ultimately, he was transformed into a pawn. The experience breaks him. Lawrence of Arabia is, finally, a tragedy.

What makes Lawrence of Arabia great

Where to start? Imagine if you had seen the movie in 1962. This was a special occasion movie -- men in suits, women in dresses, reserved seats with an usher to guide you to them, smokers in the left section, children restricted to the soundproof rooms at the back of the balcony. The lights dim to black. Suddenly, the sound of drums explodes from the speakers. For four and a half minutes, Sir Adrian Boult and the London Symphony Orchestra treat us to one of film’s most famous overtures. Written by Frenchman Maurice Jarre (third choice after William Walton and Malcolm Arnold turned down the project), the score announces action, heroism, and exoticism in equal measure. The audience immediately knew they were in for something very special. As the movie begins, you can tell that the style of Lawrence of Arabia is from a different era. It is slow to unfold and operatic in pace. But it is also an expedition with all the jolts, turns, lulls, and swoops of a ride on the Rocket Roller Coaster.

T. E. Lawrence’s life story falls into the category of "If it wasn’t true, no one would believe it." His autobiography, Seven Pillars of Wisdom, was adapted to a screenplay by British playwright Robert Bolt (Dr. Zhivago, A Man for All Seasons, The Mission). Even though Bolt had never written a screenplay before, Lean had faith in him. After a brilliant career writing for the stage, Bolt brought a rich sense of dialog and a dramatist’s eye to the epic. This forced the action sequences, impressive as they are, to take a back seat to the true drama of the work, which was Lawrence’s constant intellectual and emotional search for meaning. Steven Spielberg stated that the script by Robert Bolt is "the greatest screenplay ever written for the motion picture medium."

Newcomer Peter O’Toole (over 70 movies to his credit, foremost Becket, The Lion in Winter, and The Ruling Class) inhabits Lawrence’s skin in a way that no other actor could. All of his dandied-up, primly educated, recalcitrant traits show up. The homosexuality is implied, not exposed. His exhausting schedule required that he be in nearly every scene, yet we never tire of him. Omar Shariff (Dr. Zhivago, Funny Girl), then already a big star in Arab countries, succeeds in making you forget he’s acting. He is also the only Arab actor in a major role, which brings us to the one casting defect, common for its time, but nonetheless jarring. Rather than natives in any of the other major roles, we get Alec Guiness with mascara and Anthony Quinn with chestnut-colored skin dye and a prosthetic nose. Guiness is a guilty pleasure, talking as if each word tasted like honey, like he wanted to roll them on his tongue to taste their sweetness. Anthony Quinn (La Strada, Zorba the Greek) chews up the scenery in much the same way that his character, Auda abu Tayi slashed through his opponents. They are both wonderful, but they are not Arabs.

Consider the camera work by Freddie Young. Has anyone ever captured the desert with such veracity? Brilliant, unforgettable visions abound for the entire film. Images are burned in your brain like a brand on a calf, like a longer-term eidetic memory. A single scene exemplifies Young’s work. When Shariff appears in the distance (chapter 9) as a small dot on the horizon, bathed in the reflections of a heat mirage, he gradually comes into view. It is an unforgettable picture. Spielberg, who watches Lawrencefor inspiration before he starts each new film, said, "The mirage sequence is still the greatest miracle I’ve seen on film."

What makes Lawrence of Arabia a classic is Lean’s direction. He had proved himself a skillful director in post-war Great Britain with such films as Blithe Spirit, Great Expectations, and Oliver Twist. Then he broke through in America with The Bridge on the River Kwai. None of these would prepare us for the vivid luminosity of Lawrence of Arabia. While I know little about Lean the man, I can assure you based on the evidence of this one film, that he was intelligent, insightful, and, above all, an artist.

Exhibit 1: The Match. In chapter 3, Lawrence lights a cigarette for William Potter (played by Harry Fowler) and puts the match out with his fingers. Potter tries to imitate it.

Here’s a little philosophy to go with your character development. Six minutes later, Lawrence is about to pull the same trick with Dryden as they discuss Lawrence’s strange sense of what is fun. As he lights the match, he rolls up his sleeve and holds the match close to his face. We are tricked into thinking he will put out the match with his fingers again. Instead, he blows the match out and we are instantaneously transported to a beautiful, blood-red sunrise on the Nafud desert. It is as breathtaking a cinema moment as any in history. It’s up there with the last scene in Casablanca, the door opening to show Marlon Brando in The Godfather, or the door closing as John Wayne walks out in The Searchers.

Speaking of The Searchers, let’s acknowledge the debt David Lean owed to its director, John Ford -- not just in the obvious "tortured hero" character that Ford had perfected in The Informer, The Quiet Man and The Searchers. Ruminate on the panoramic use of location filming. Several times in Lawrence of Arabia, I could imagine Ford’s Monument Valley vistas. The Arabs attacking the Turks looked like nothing so much as an attack on the wagon train by Indians in Ford’s Cavalry Trilogy (Fort Apache, She Wore a Yellow Ribbon, Rio Grande). The primary debt owed to Ford involves the most subtle and intangible aspects of his art: verisimilitude, genuineness, and humanity. It’s the feeling that you have seen the true essence of a place, its time and its people. It’s as if you were watching an actual event, from a safe distance, but close enough to be involved. This trait is rare in film. Think to your own experience. How many movies successfully transport you to another world? Ford’s ability to dependably pull off this hat trick is why so many believe him to be at or near the top of the list of our greatest directors. Lean’s ability to recreate this elusive feeling in his three top epics (The Bridge on the River Kwai, Lawrence of Arabia, Dr. Zhivago) lays bare the sheer size of his talent.

Can you see the greatness of Lawrence of Arabia on a 21" or even a 210" screen? Doesn’t it really require one of the movie palaces of the 1950s? I hate to equivocate, but I will. I’ve only seen Lawrence on the big screen, at a multiplex, in its 1989 re-release. It was stunning and overwhelming. We have a movie palace (the Paramount) where I live (Austin) with a hot-rodded 70mm projector donated by Ron Howard. Hopefully they will show the film so I can relive its earlier glory. Until then, I have to say that I experienced the magic all over again on my 120" screen. The restored film elements looked beautiful. O’Toole’s impossibly azure eyes blazed. The desert scenes were detailed without any of the hyping artifacts you so frequently see with classics.

Sonically, Lawrence is a blockbuster. From the orchestral score to the rumble of the opening motorcycle, everything sounds right. With a couple of exceptions, you might think that not much is going on in the surrounds, but turn them off and you will notice that the entire soundstage shrinks forward. The surrounds do get a workout during Lawrence’s trip through an echoing canyon.

Lawrence of Arabia has the best extras I’ve seen yet on a DVD. A wonderful documentary from the 1989 re-release called "The Making of Lawrence of Arabia" goes behind the scenes in more depth and detail than the fluff pieces you usually see. There are six other short features about the movie, talent files, newsreel footage of the New York premier, and trailers. There is also a conversation with Steven Spielberg about what makes this movie so important. At one point, he talks about sitting through a screening with Lean where Lean described everything he did and why he did it, which leads me to my only cavil about the extras: Why couldn’t we have Spielberg on a commentary track, telling us what Lean told him? Or better yet, why not have directors Martin Scorsese and Steven Spielberg and producer Jon Davison (all of which peddled influence and gave money for the restoration) do a commentary track. Surely they’d be interested as well as interesting.

1962 was an exceptional year for Oscars. A surfeit of impressive films was released: To Kill a Mockingbird, The Miracle Worker, The Manchurian Candidate, Lolita, Mutiny on the Bounty, The Music Man, Days of Wine and Roses, The Man Who Shot Liberty Valance (Ford up against Lean!). Lawrence of Arabia dominated and was nominated for ten Academy Awards. It won seven, including Best Picture, Best Director, Best Cinematography, and Best Score. The three losers were O’Toole, Shariff, and Bolt. O’Toole lost to Gregory Peck in To Kill a Mockingbird. Shariff lost to Ed Begley inSweet Bird of Youth. Bolt lost to Horton Foote for To Kill a Mockingbird. Some of these were good films. For me, none are in the same category as Lawrence. I bring this up for a purpose.

We re-view older movies through the wisdom of hindsight. Occasionally, you or I might be disappointed by a film not living up to its reputation (real or remembered). But somehow, the second or third time around, the best -- the classics -- begin to resonate in and with your psyche. They take on a life that is enmeshed with yours in ways you don’t recall until you see the film again. Only the greatest films do this. While I appreciate lots of films intellectually, few are powerful enough to bring about this symbiotic effect. For me, Columbia’s exceptional DVD of Lawrence of Arabia has the power.