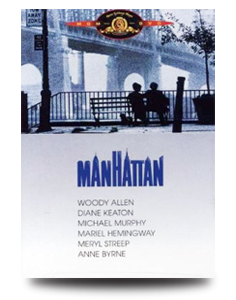 George Gershwin’s music blares across the speakers, and in black-and-white photography unmatched since Citizen Kane, New York City blazes across the screen with more sex appeal than a slow, meandering shot of a lightly sweatered 1930s starlet. It looks as if Woody Allen has created a love story for his hometown. Then we hear Allen’s deadpan voice:

"‘Chapter One: He adored New York City. He idolized it all out of proportion.’ Uh, no, make that: ‘He, he romanticized it all out of proportion.’ Yes. ‘To him, no matter what the season was, this was still a town that existed in black and white and pulsated to the great tunes of George Gershwin.’ Eh, no, missed out something. ‘Chapter One: He was too romantic about Manhattan, as he was about everything else. He thrived on the hustle and bustle of the crowds and the traffic. To him, New York meant beautiful women and street-smart guys who seemed to know all the angles.’ No, no, corny, too corny for a man of my taste. Can we, can we try and make it more profound? ‘Chapter One: He adored New York City. To him, it was a metaphor for the decay of contemporary culture. The same lack of individual integrity that caused so many people to take the easy way out was rapidly turning the town of his dreams into --’ No, that’s a little bit too preachy. I mean, you know, let’s face it -- I want to sell some books here. ‘Chapter One: He adored New York City, although to him it was a metaphor for the decay of contemporary culture. How hard it was to exist in a society desensitized by drugs, loud music, television, crime, garbage --’ Too angry. I don’t want to be angry. ‘Chapter One: He was as tough and romantic as the city he loved. Behind his black-rimmed glasses was the coiled sexual power of a jungle cat.’ I love this. ‘New York was his town, and it always would be . . .’"

Of course, with "the coiled sexual power of a jungle cat," we know that we’re hearing typical solipsistic Woody Allen shtick in which he goofs on himself as a typical solipsistic member of the Manhattan intelligentsia, this time one named Isaac Davis. In other words, it’s like a Charlie Kaufman film, only funny. Very funny.

The jokes Allen writes for himself in Manhattan come from a comedian at the top of his game. Even the lines Allen writes for Diane Keaton’s character, Mary, would be manna to most comics. Who writes like this today? Judd Apatow’s writing is as funny, but it rarely tickles the intellect. Andrew Stanton pulls hard at both the laughs and the tears, but again, you won’t find many jokes about Kafka or Strindberg.

The cast is loaded with great actors. Keaton is hilarious, Michael Murphy is a jerky predator, and Meryl Streep is perfect as Isaac’s ex-wife, newly converted to lesbianism. Perhaps the best was the only one of the bunch to be nominated for an Oscar: 17-year-old Mariel Hemingway, as doe-eyed, sexually willing Tracy: "Let’s fool around. Let’s do it some strange way that you’ve always wanted to, but nobody would do with you." Far more mature than the much older Isaac and his friends, Tracy creates the most centered character in this cabaret of neurotic meshuganner.

Woody Allen has directed 42 films and written 47. He likes to joke that, though they make money, the Hollywood types aren’t interested in films that make only a few million dollars. One of the reasons he now makes films abroad is that European bankers are happy to back his films, thus freeing him from the Hollywood studio system. The bankers obviously think he makes enough money for them, even though he’s uneven as a director. Of his 42 films, there are at least a dozen classics, and of those, five that are timeless: Annie Hall, Manhattan, Hannah and Her Sisters, Bullets Over Broadway, and Match Point. He’s been nominated for an Oscar 14 times for his writing (and probably a 15th for this year’s Whatever Works). Billy Wilder, considered by most to be the best writer-director in history, received a total of only 11 nominations. Allen has been nominated another six times for Best Director, and once for Best Actor. That’s 21 altogether, a number that must be a record.

Allen’s response to all these Oscars and nominations? "I have no regard for that kind of ceremony," he said in 1978, the year before Manhattan was released. "I just don’t think they know what they’re doing. When you see who wins those things -- or who doesn’t win them -- you can see how meaningless this Oscar thing is." Still, he could paper his New York apartment with all the awards he’s received from around the world (see here for a list).

Allen’s problem, especially of late, is that viewers draw little distinction between the characters Allen plays and Allen himself. Thirty years ago, when Manhattan was released to almost universal acclaim, what most folks thought they knew about Woody Allen was that he was funny, phobic, and ferally horny. In Manhattan, the story of a 42-year-old man having a sexual relationship with a 17-year-old girl provoked feelings of "gross" or "way to go," depending on which side of the gender gap you fell. And although Allen’s films are often seen as iconoclastic, Manhattan is, at heart, a sweet love story in which nature does step in and Allen falls for someone more his own age.

Of course, that was before 1992, when Allen and Soon-yi Previn, the adopted daughter of Mia Farrow (Allen’s lover for the previous 12 years), announced that they were a couple. He was 57, she was 22. However ethically ambiguous the relationship might be or have been, the sad fact is that it cast a pall over Allen and, by extension, his films.

The bigger question, especially for anyone who has digested Manhattan, is why Allen has stayed with Soon-yi and not moved on to someone nearer his own age and wide-ranging interests. As mirrored by Isaac’s dilemma in the film -- Tracy or Mary? -- Allen usually spends some time with a younger woman, then leaves her for an older woman. His first wife, Harlene Rosen, was 16 when they married. He left her for 27-year-old Louise Lasser, left Lasser for 24-year-old Diane Keaton, and then, after a short liaison with 17-year-old Stacey Nelkin, vamoosed for 35-year-old Mia Farrow, and finally, 22-year-old Soon-yi Previn.

Farrow had already been married to Frank Sinatra (he was 50, she 21) and, four years later, André Previn (he was 41, she 25). Despite the fact that Farrow was complicit in the dirty fighting with Allen (Soon-yi said of her adoptive mother, "She’s no Mother Teresa"), Farrow won the public role of the wronged and trod-on woman. Most in the U.S. vilified Allen. During the legal haggling, Farrow accused Allen of sexually abusing another daughter, then seven years old (the allegation was later disproved). Sinatra reportedly called ex-wife Farrow and offered to have Allen’s legs broken. Allen’s natural son with Farrow -- a preternaturally smart kid who went to Yale Law School at 15 -- offered the following, with the clarity of a great writer and the sting of a pissed-off comedian: "He’s my father married to my sister. That makes me his son and his brother-in-law. That is such a moral transgression." Is it now possible to see Manhattan without thinking of the Allen-Farrow dustup? I hope so.

Currently, Manhattan is available only on DVD. Despite the fact that it’s in black and white, it was so gorgeously shot by cinematographer Gordon Willis that it deserves the high-definition treatment. Allen was a champion for videophiles early on when he refused to allow anyone to show his film with cuts, or in any format other than what was then called letterboxing. Untold numbers of viewers returned their copies of the VHS version because they thought something was wrong with the picture ("What are those damn black stripes doing on my screen?"). Allen stood firm. Unfortunately, he’s also against DVD extras -- in his opinion, the film should speak for itself. So all you can expect is a good picture, which is what you get with the MGM DVD.

Manhattan is Woody Allen’s least favorite film, despite (or maybe because of) the fact that it was his biggest money-maker. "I hated that one," he said. "I still can’t believe, even to this day, how it became so commercially successful. I can’t believe I got away with it."

Luckily for us, he did.