If you’re a regular here, or on any of the other SoundStage! Network sites, it’s safe to assume you love music and listen to a lot of it. It’s also likely that you appreciate the subtleties in the characteristics of various musicians -- whether you like jazz, rock, classical, or country. Your ear, to say nothing about your equipment, is sensitive enough to tell the difference between Jimi Hendrix and Jimmy Page, or Carla Bley and Paul Bley, even if they’re playing the same composition.

It’s probably also safe to say you’re in the minority -- not just for how much time, thought, and money you’ve invested in sound equipment, but how you can distinguish between instrumentalists. Let’s be honest: the differences between Herbie Hancock, Chick Corea, and Wynton Kelly can be slight were they all to be heard playing “’Round Midnight” in Miles Davis’s band. While musicians, particularly jazz musicians, pride themselves on developing their own voices, each instrumentalist’s personality quirks and stylistic fingerprints are likely to elude the average listener -- even the average fan.

That is not the case for pianist Ran Blake.

At 85, the Massachusetts-born artist and educator has an unmistakable touch and tone, and a distinctly unique love for music that ranges from atonal art pieces to Al Green. As I’ve written before, he has devoted his career to exploring the piano’s entire dynamic range, pioneering fingering techniques that he has passed on to younger musicians like Matthew Shipp and Jason Moran. Since 1967, when he joined the faculty of the New England Conservatory (NEC), he has shared his passion for music that defies stylistic boundaries with countless students, and while he has never quite become a household name -- even among jazz critics -- whatever he turns his attention to becomes indelible to those who hear it.

As well as through his teaching, Blake has shared his singular art with a wide range of musicians in duet settings, from his groundbreaking work with the singer Jeanne Lee to the brilliant contemporary vocalist Sara Serpa, and now to the Canadian saxophonist Andrew Rathbun.

A native of Toronto who has lived in the United States since the ’90s, Rathbun seems like a natural partner for Blake. While steeped in post-bop jazz language, he is also deeply influenced by classical composers like Maurice Ravel, and while Blake is obsessed with film-noir, Rathbun has returned frequently to the works of Canadian iconoclastic artists like Margaret Atwood and Glenn Gould for inspiration. Since studying at NEC, where he learned from Blake’s friend George Russell and Jimmy Giuffre, the saxophonist has split his time between performing and academia. Since 2012, he’s taught saxophone and jazz studies at Western Michigan University. And, like Blake, he’s never quite broken through to the critically acclaimed ranks of contemporaries like Joshua Redman and Chris Potter, although he has released some truly moving and memorable recordings.

So call this a meeting of the underappreciated thinkers, and a deeply charming and compelling meeting it is. 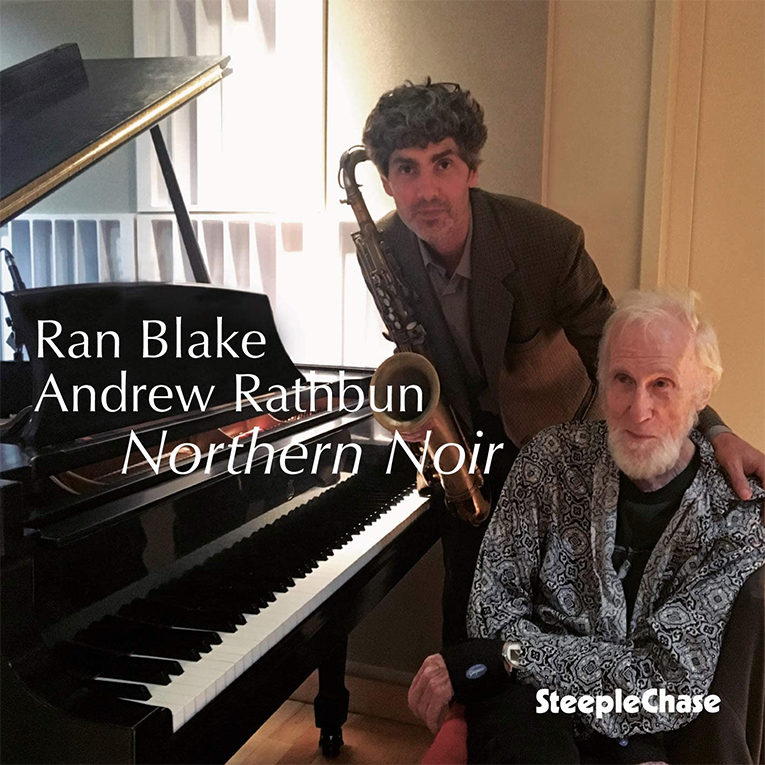 Released on the venerable Danish label SteepleChase Records -- home to many an outcast jazz artist over the past 48 years -- Northern Noir contains 18 performances, some as short as just 1:23. While the album was finalized early this year, the timing of its bookends -- two takes of Abel Meeropol’s “Strange Fruit” -- could hardly be more apt. The first version opens with some truly haunting discordant harmony from Blake, and his accompaniment of Rathbun’s breathy melodic narrative is no less disturbing. It’s a cliché to claim that Blake finds notes between the notes, but it’s a credit to his long study of unexpected voicings that the pianist’s work here makes you long to see it notated. The second version of “Strange Fruit” sounds more mournful than angry, with Blake leaving his spare notes to linger as Rathbun plays a variation of his previous melody line. To read into the placement of the two versions, it seems as if the first expresses the horror of discovering the reality of black lynchings, while the second seems to comment on the fact that brutality against black lives continues to the present.

Another unsettling combination, Roy Webb’s title song from the 1946 film-noir classic The Spiral Staircase, carries Blake back to his roots. He saw the Robert Siodmak film as a 12-year-old, and has returned to it again and again over the intervening 73 years. Here, Rathbun sits out as the pianist pounces around the theme, and then plays the villain to Blake’s eerie scene-setting -- bleating threateningly and then seeming to chase Blake as the two mount the staircase of the title.

They wander onto a few other film sets: strolling languidly through the theme to Otto Preminger’s Laura, composed by David Raksin, and then jumping a decade forward for Bernard Herrmann’s title composition for Alfred Hitchcock’s film Vertigo. These are sturdy songs, better known in more heavily orchestrated form, and fertile ground for these two.

While the ominous backdrops of these dramatic films set the prevailing mood, there is warmth to be found in a gorgeous take on Thelonious Monk’s “Pannonica” -- the longest song at close to six minutes -- that bows to the simpatico pairing of Monk and saxophonist Charlie Rouse. How they are missed.

Both in solo and duet settings, the soundstage is intimate and natural, allowing the instruments to bloom to their fullest.

In all, a lovely, languid exploration of some deep and expressive songwriting that unveils new mysteries with every listen.