Fifty years ago, Jimi Hendrix found himself in a quandary. As he entered the final year of his short life and approached his 27th birthday, he was at a crossroads. For a musician who had been on the road almost constantly since leaving the army in 1962, he was uncharacteristically idle. He didn’t have a single concert between a Harlem benefit show on September 5, 1969, and the first of a two-night/four-set stand at New York’s Fillmore East on New Year’s Eve. For someone whose time in the international spotlight lasted only 1430 days, that 122-day span of concert inactivity represented a massive chunk of time.

It’s not that he wasn’t busy; indeed, he logged studio time on at least 14 days. He also traveled to Toronto to stand trial on charges related to his arrest for illegal possession of heroin and hashish on May 3, 1969.

But while Hendrix wasn’t without work during those three months, his direction wasn’t exactly clear. His brief attempt to lead a large ensemble -- the sprawling Gypsy Sun and Rainbows group that headlined the Woodstock festival -- was over. In its place, Hendrix returned to a trio format, with army friend Billy Cox on bass and Mitch Mitchell, his drummer from the Jimi Hendrix Experience.

With both Hendrix and his shadowy manager, Michael Jeffery, dead, the decisions made during this three-month period at the end of the decade remain shrouded, but it’s clear that chaos and uncertainty ruled. Rumors continue to this day that Jeffery was concerned that his client was being swayed by outside influences, which may or may not have included the Black Panthers. Whether that political-activist organization was involved or not, Jeffery feared that Hendrix was stepping away from what Jeffery viewed as commercial music. 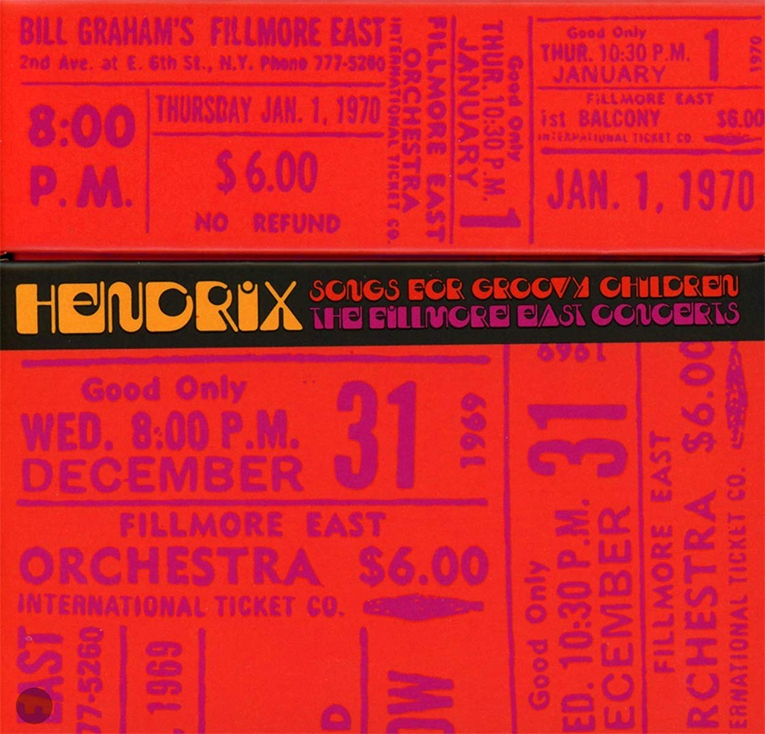 One of these rogue forces was the veteran jazz producer Alan Douglas, who befriended Hendrix around the time of Woodstock. The guitarist hadn’t employed a producer since splitting with Chas Chandler in 1968, and Douglas attempted to step into the role as the fall of 1969 began. It was such a disaster that Cox walked out of the sessions and returned to Nashville for several weeks.

Another influence during this period was Buddy Miles, an ebullient drummer who had moved in parallel to Hendrix on the so-called chitlin’ circuit of nightclubs during the early ’60s before settling in Chicago and co-founding the Electric Flag. Miles was a relatively rudimentary percussionist -- particularly when compared to the multi-directional Mitchell -- but he could lock down a beat with power and had a decent singing voice with a strong upper range.

Featured on part of Electric Ladyland, Miles rejoined Hendrix in April 1969, making the debut of what came to be known as the Band of Gypsys on a version of Muddy Waters’s signature song, “Mannish Boy.” Throughout the spring and summer, Mitchell was in the drum seat, but he returned to the UK in the fall for a break, leaving the door open for Miles’s return. Popping in and out of the Record Plant, frequently after jamming with other musicians like Johnny Winter and Stephen Stills, Hendrix began to work on a body of music that would carry him away from the fantastical songs that had appeared on his first three albums and toward more personal sounding and rhythmically based material. Among the pieces that came out of these sessions were “Ezy Ryder,” “Stepping Stone,” “Freedom,” and “Power of Soul.” With a handful of exceptions, these songs weren’t composed as much as they were developed in the studio, based on guitar riffs or rhythmic notions.

It’s unclear whether Hendrix intended these songs for any particular project, largely because of yet another influencing factor -- a contractual settlement he and Jeffery had made with record producer Ed Chalpin and PPX Enterprises, which called for Hendrix to deliver an album to Capitol Records. Neither Hendrix nor his manager wanted to hand over a full album of new studio material, so they landed on the idea of giving Capitol a live record.

But first, Hendrix had to deal with his legal issues, which had the potential to net him 20 years in a Canadian prison. Following his acquittal, the way was clear for the Band of Gypsys to move onto the stage, and eight days after the Toronto decision Hendrix was in New York preparing for the Fillmore dates. Jeffery booked the trio into Baggy’s, a rehearsal space in New York’s Chinatown, and the band focused on ten songs, including seven Hendrix originals. 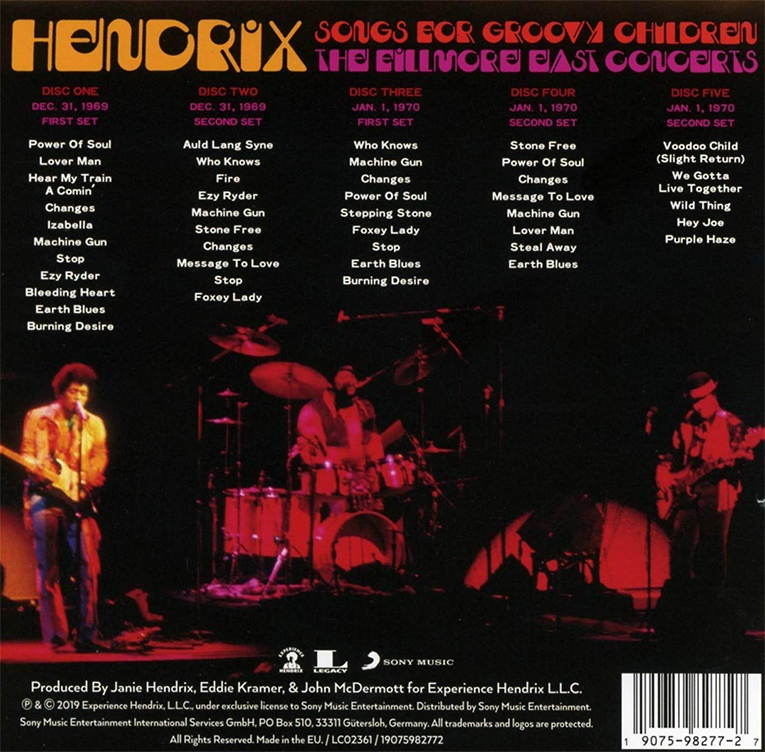 For the opening set at the Fillmore, the band rolled out 11 songs, including Miles’s signature “Changes,” Elmore James’s “Bleeding Heart,” and “Lover Man,” a song Hendrix had been performing throughout his career with the Experience. In total, they played 43 songs -- amounting to five and a quarter hours -- over the two nights.

Six songs from the concerts, including a version of “Machine Gun” that many music critics -- myself included -- consider the highlight of Hendrix’s career, were released in April 1970, fulfilling the contractual debt to Capitol Records. Another three were included in a compilation in 1986, and most of the rest were released in 1999.

While nothing else in the four sets approaches the apotheosis of “Machine Gun,” several pieces can stand alongside most live Hendrix recordings.

“Stone Free,” one of the few Experience numbers included at the Fillmore, shows Hendrix’s masterful ability to shape feedback, and includes some inspired rhythm playing during the coda. “Hear My Train a Comin’” is rendered as a blues march, with Hendrix soloing passionately, and two alternate versions of “Machine Gun” contain highlights, although neither has the sustained tension and drama of the original. Dedicated to “all the soldiers fighting in Vietnam” and, pointedly, to the members of the National Guard called out to quell rioting in America’s black ghettoes, the pivotal performance of “Machine Gun” is an angry torrent of sound that flows from Hendrix’s guitar with seamless inventiveness that rivals solos by jazz musicians like John Coltrane and Miles Davis.

But four full, unedited sets make Miles’s technical shortcomings obvious, and it’s evident that the band hadn’t completely learned the material. There are blown lyrics and sloppy transitions, and Hendrix apologizes after a particularly messy version of “Stepping Stone.”

That was the only weak number in the first set of the New Year’s Day show, which also produced the groundbreaking “Machine Gun,” an aggressive version of “Power of Soul,” and an effective soul song called “Stop.”

Given how haphazard some of Hendrix’s earlier concerts seem in retrospect, though, the audiences at these four sets were able to glimpse a new direction in the guitarist’s music, and there’s no question that Cox solidified his role in Hendrix’s evolution. On song after song, the bassist feeds him complementary lines and propulsive rhythms that seldom flowed from Noel Redding’s instrument with the Experience.

Despite having the complete Band of Gypsys Fillmore shows in our hands, one myth concerning the two-night stand remains: Did promoter Bill Graham confront Hendrix after the opening set, challenging him to play up to his potential and not pander to his audience?

The myth doesn’t stand up to scrutiny. Was Graham even in attendance? He doesn’t introduce the first set and, while the band sounds rough during that show, Hendrix’s playing is anything but tepid. As told by Graham, the story has it that, chastened by the harsh criticism, Hendrix played the second set -- which began at midnight with a rendition of “Auld Lang Syne” -- standing stock still until he moved over to the promoter’s position at side stage, growled “What do you think about that, motherfucker?” and then returned to perform with the same kind of exuberant sexuality that he displayed early in his career with the Experience. While no visual evidence of this set exists, and Hendrix ends the set with “Foxey Lady,” there’s little to support the tale. It seems more like a story Graham told to illustrate his influence over artists who performed on his stages. It makes more sense that Hendrix’s reaction took place during the final set, when he rolled out his old hits, “Wild Thing,” “Hey Joe,” and “Purple Haze,” yet that would mean that Graham took issue with a set that included the epochal “Machine Gun.” Graham had better ears than that.

Recorded by mobile sound veteran Wally Heider, the Band of Gypsys material has never sounded this good. With engineer Eddie Kramer on board, that’s no surprise; no one understands Hendrix’s music as intimately.