The Dave Miller Trio with Rebecca DuMaine: "Better Than Anything" 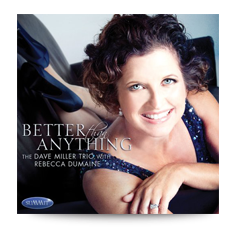 The title song for Better Than Anything was written some years ago by David "Buck" Wheat and Bill Loughborough and has become a standard for many jazz performers, but I've never heard it set forth so persuasively as in the first cut of Rebecca DuMaine's new CD. With its endless list of delights, always culminating in "better than anything except being in love," the tune can become breathless or kitschy, but DuMaine manages to make it swing with her beautifully enunciated approach. It's a great start to an album that's the swingiest affair I've heard in some time.

It seems that no matter how DuMaine and the trio start a song -- and many of these start in a romantic way -- they end up swinging. She swings lightly, brightly, softly, and in other ways that probably have no adequate modifiers. But DuMaine can't take all the credit. Her father, David Miller, pianist and leader of the Dave Miller Trio, swings a mean piano. Together, ably aided by bassist Mario Suraci and drummer Bill Belasco, they explore all the ins and outs of swing and make each song their own.

DuMaine has something of a Broadway-type voice, at times a little punchy but never irritatingly so. She has a dead-center sense of pitch and makes every word understandable. But she also has that indefinable thing, the "it" so cherished in days way gone past. Together with the trio, she creates renditions of songs that always sparkle and often sizzle.

The song list is stellar. There are two Jobim tunes, "No More Blues" and "Dreamer"; Vernon Duke's "What Is There to Say"; Peggy Lee and Duke Ellington's "I'm Gonna Go Fishin'"; and two Leonard Bernstein songs, "It's Love" and "Lucky to Be Me." Two fresh-sounding classics, "It Might As Well Be Spring" and "Cheek to Cheek," both sound better than ever with the DuMaine-Miller swing treatment.

The recorded sound is bright and transparent with loads of presence. Recorded at Fantasy Studios, engineered by Adam Munoz, and mastered by Ken Lee, it places singer and players in the same acoustic so that balances are left up to the artists, not the tech men. It's a sound I really like, and one that seems totally appropriate for the music.

Better Than Anything is an exceptionally upbeat album, one likely to put you in a good mood no matter how you feel before hearing it. It's beautifully recorded and an event that everyone should enjoy.

Be sure to listen to: Miller's energetic accompaniment and solo in "I'm Gonna Go Fishin'" are exceptional. The father-daughter connection really works here.