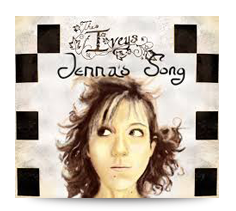 I have a theory that folk and acoustic music will never die. No matter what the decade or the prevailing musical styles, musicians will find a way to include folk and acoustic elements. Look at the recent popularity of Mumford & Sons and Lady Antebellum. They play sold-out houses in very large venues. The Iveys aren't quite there yet, but they have played over 500 shows and had six national tours, albeit in some smaller venues. Their fans pay more than lip service to the three-piece sibling band, having entirely funded their third and newest album, Jenna's Song.

The album gets off to a rocking start with "True Love Honesty," which is driven by one of those strumming rhythmic figures that propels ABBA songs and Fleetwood Mac's "Second Hand News." In fact, you'll hear a lot of Fleetwood Mac influence through the 15 cuts of Jenna's Song, not to mention some amazing CSN-style close harmony vocals, especially in "Worth the Danger." "Jenna's Song," by the way, was inspired by another Ivey sibling (Jenna) who plays the violin.

Most of the album is upbeat; you won't find woeful songs about drug use here. It's more about living a good life and spreading your wings, as on "Me Oh My Oh." And of course there are songs about love, even unrequited love ("Nothing Comes"). The melodies are strong and the hooks are clever, establishing Arlen as one very potent songwriter. And musically, all three Iveys sound like seasoned pros, with appealing voices and virtuoso instrumental chops.

I am so enthusiastic about the group that the recording let me down a bit. Though produced by Charles Godfrey, who has worked with Yeah Yeah Yeahs and Hanson, I found it too thick with added reverb. Yes, it sounds big and bold, but enough delicate detail gets through to let you know that you might be missing more in the heavy mix. I'd like enough transparency to be able to hear through to those details.

The album releases in March, but you can preorder it through Amazon and other dealers. To get a preview, along with some great photos and a few videos, you can visit the group's website. I have a strong feeling that after this third album is released, we'll be hearing a lot more from this talented band. If you like Lady Antebellum, it seems a no brainer that you'll adore The Iveys. They're less country, but just as good.

Be sure to listen to: In "Nothing Comes" Jessica sings the lead (not identified in the notes), and she has this line near the end of the song: "I hate to say this to you now. I'd keep your love, but I don't know how." It's a small but potent moment that sent chills down my spine.