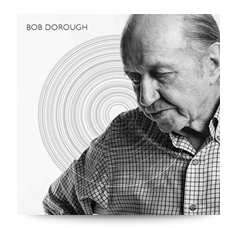 Back in the day, one of my favorite bands was Spanky and Our Gang. They were a little stronger on folk than rock and sang some devilishly clever tunes, one of them being "Five Definitions of Love." I marveled that anyone could create such flowing music from reading the dictionary, and I was at a loss to describe the style. Spanky and Our Gang weren't just rock, or just folk, and what was that other element that made them irresistible?

Now I'm quite a bit older and I know. There was a magical touch of jazz in the music, and that came from one of its producers, Bob Dorough. Unfortunately, Spanky and Our Gang died a quick death, as two of its members passed away at much too young an age. But Bob Dorough lives on at 90 years old, and he still plays a wicked jazz piano and writes A+ arrangements. He sings, too, and while it's a threadbare sound much of the time, there's purpose and a lifetime of knowledge in his vocals. And that doesn't just count for something; it counts for a lot.

Dorough does his own version of "Five Definitions of Love," titled "Love (Webster's Dictionary)," and he turns it into a marvelous seven-minute lesson in improvisation. First he sings and plays the song, with solid backing from bass (Steve Gilmore) and drums (Herman Matthews). Then there's an extensive instrumental section for piano, bass, and guitar (Ray Wilson), followed by a recap of the vocal. What fun!

That's the second cut on the disc; the first is the title song, an instrumental that features Dorough's daughter, Aralee Dorough, who is principal flautist of the Houston Symphony. Aralee figures in several cuts on the CD and has a flowing, dulcet sound coupled with fine technique. This song is reprised at the end of the disc. Along the way there's my second favorite, "To Be or Not to Bop," which features positively sensational trumpet playing from Dennis Dotson. But don't get too lost in that to notice what Dorough does with the piano accompaniment. What a master!

"I've Got Just About Everything" and "A Few Days of Glory," the former featuring superlative sax from veteran Phil Woods, are also great cuts, but honestly, there's nothing on this CD that isn't worth hearing more than once.

The sound is lean and crisp, with perfect balances and welcome transparency. It also has that elusive thing that can make a good recording great -- presence! All in all, with so many legendary artists on hand giving their all, Eulalia is a life-affirming listen.

Be sure to listen to: The sax solos from Phil Woods in "A Few Days of Glory" are marvelous, and from a musician who, at 82, can easily keep up with Dorough. What a thrill to hear him play like this!