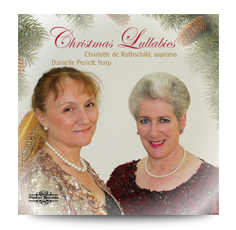 If your nerves are frayed by shopping the malls where “A Holly Jolly Christmas” or “The Little Drummer Boy” are being blasted out with 16-percent harmonic distortion by inadequately powered sound systems, Christmas Lullabies might be just the album for you.

Charlotte de Rothschild is a member of the famous Rothschild banking family of England. She studied singing in Salzburg and London. She has specialized in recital and oratorio repertory, which has led her to a vast knowledge of concert hall songs. This has allowed her to put together recitals that have a theme as their basis. Fairy Songs is one such, A Japanese Journey is another, as is Christmas Lullabies. She has also recorded a two-disc set of songs by her neglected ancestor, Mathilde de Rothschild, who studied with Chopin.

Just seen in her photographs, Charlotte de Rothschild appears matronly, a handsome middle-aged woman. I expected to hear a voice past its prime, with a vibrato bordering on a wobble. Not so! De Rothschild’s voice is a pure and lovely soprano belying her age but it is guided by a sensibility and understanding that come only with time. Her singing is, then, the best of two worlds, and it was a masterstroke to have her accompanied by the solo harp of Danielle Perrett.

Together the two women present music mostly written by, or arranged by, 20th-century songwriters. Edmund Rubbra and Peter Warlock are each represented by two songs each and John Ireland’s well-known “The Holy Boy” is there as well. One of my favorites, “The Little Road to Bethlehem,” by Michael Head, is exquisitely and simply performed to great effect; and “I Wonder as I Wander” by America’s own John Jacob Niles is given longing and wondrous expression.

To break up the program and keep it from being too much the same, there are four pieces for harp alone, the best of which is a sumptuous arrangement of “What Child is This,” which is, in turn, an arrangement of “Greensleeves.” The other harp interludes are “Let All Mortal Flesh Keep Silence,” “Lo, How a Rose e’er Blooming,” and “O Come, O Come Emmanuel.”

At the end of the disc, Charlotte de Rothschild essays two more pop-oriented tunes with great success. Howard Blake’s “Walking in the Air” from the animated short The Snowman sounds tailor made for voice and harp even if it can’t quite eclipse the memory of Peter Auty’s original. The Rothschild-Perrett version of “Chestnuts Roasting on an Open Fire” is straightforward, unfussy, and very beautiful.

The recorded sound is excellent, the voice and harp well balanced with each sounding crisp and clear. All in all, this is a welcome album of holiday music in a quieter and reflective vein.

Be sure to listen to: For another, near magical version of “Walking in the Air” try this version by Welsh tenor Aled Jones. Happy holidays to all!