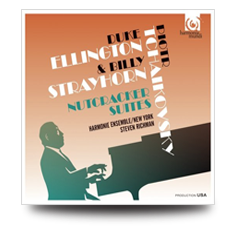 First Recording in 50 Years of an Ellington Classic

The Duke Ellington-Billy Strayhorn version of Nutcracker Suite has not been recorded since Duke's original in 1960. How great, then, to have an excellent new rendition in superb sound. And what a stroke of genius to pair it with Tchaikovsky's original, which is why this disc is titled Nutcracker Suites.

Not that the two are too much alike. The Ellington-Strayhorn suite isn't merely a jazzed-up classical. It's a new composition using Tchaikovsky's musical themes. These are often presented in a jagged manner with two or more different instruments or instrumental choirs bouncing the tunes around like ping-pong balls. One instrument might start a phrase, while another finishes that same phrase. Nowhere is this technique more in evidence than in "Toot Toot Tootie Toot," derived from "Dance of the Mirlitons (Reed Flutes)."

Ellington and Strayhorn turn "Dance of the Sugar Plum Fairy" into "Sugar Rum Cherry," a languid and sultry affair with the melody given over to slinky saxophones. "Trepak (Russian Dance)" becomes "The Volga Vouty," a romp with weird, muted brass and a freewheeling clarinet solo.

The two movements that are most recognizable in comparison to the original are "Overture" and "Danse of the Floreadores," though the latter, using themes from "Waltz of the Flowers," is put into 4/4 time rather than the lilting 3/4 usually required to earn the name valse or waltz. It's one of Ellington's bolder moves, and it works.

Steven Richman and the Harmonie Ensemble/New York seem the perfect artists to realize both suites, as they have often performed concerts that have bridged classical and jazz. Their performance of the original suite is bright and upbeat, not one I'd put in the upper echelon that includes discs by Leopold Stokowski, Ernest Ansermet, Antal Doráti, Eduard van Beinum, and Felix Slatkin, but surely it can stand in the second tier with those by Bernstein, Karajan, and Ormandy.

The performance of the Ellington-Strayhorn suite is suave and saucy, with the players sounding like the best big band in history. In both ensemble and solo work, they cover themselves in glory. Lew Tabackin (tenor sax), Lew Soloff (trumpet), Bill Easley (clarinet), Victor Lewis (drums), and George Cables (piano) all make significant solo statements. So as far as I'm concerned, it's impossible to fault this performance.

The recorded sound is also a star, making everything clean and clear with nearly ideal balances throughout. I could use a little more of the excellent string bass playing of Hassan Shakur, but that would probably make the recording sound unnatural. As it is, it's one of the most natural big-band recordings I've ever heard, with little evidence of postproduction mixing.

It was a great idea to pair the two suites and the execution, and recorded sound of this Harmonia Mundi CD have partnered to make it an indispensable holiday treat.

Be sure to listen to: The "Entr'acte" movement of the Ellington-Strayhorn suite draws themes from the "Overture," and has one of the most breathtaking wailing clarinet solos you're likely to hear.