Hiroe Sekine: "After the Rainfall" 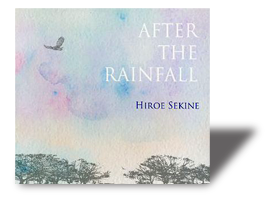 It often seems to be feast or famine when I'm looking for a music title to review. Lately it's been feast -- January was a bumper month for female jazz vocalist CDs of high quality. Tania Maria, Lorraine Feather, Joanna Weinberg, Catherine Russell, and Sara Gazarek all released dynamite discs of distinction. I chose Hiroe Sekine's After the Rainfall for this week's release because it's also a four-star offering, but it arrived with far less fanfare than the others and I feared it would be overlooked.

Sekine was born in Japan and studied at music schools there and in Fullerton, California (Fullerton College). After the Rainfall is her second album, a colorful, gossamer collection that caresses the ear in a beguiling, laid-back manner. Some might dismiss Sekine's music as "soft jazz" or "easy listening," but that would be selling it short. As pianist, singer, composer, and arranger, Sekine may lean toward the easily listenable hook or variation, but that doesn't mean there's no talent or inventiveness in her work. Subtle music is often more difficult to perform than something flashy.

The CD opens with Sekine's own composition, "Song of the Owl," which begins with a rhythmic figure on the piano. You'll be immediately struck by the instrument's rich, natural sound, and from that point on you'll have no doubt that this will be an album with above-average sonics. As shimmering struck cymbals, solid yet not overly aggressive bass, and warm and rich guitar join in, setting the stage for Bob Sheppard's saxophone solo and Sekine's wordless vocal, the set quickly develops into an audiophile's delight. Continuing the dreamlike mood, Sekine encores with the title song and then, with no temerity or imitation, launches into the Lennon-McCartney classic "In My Life," in which she duos with Arnold McCuller. It's a romantic rethinking of a timeless song that resonates with sincerity and beauty.

After a playful, good-natured romp with Chick Corea's "Windows," Sekine turns to "Aqui Ó" and then Jobim’s "Inútil Paisagem." In the latter two, Sekine calls to mind early Astrud Gilberto with her childlike, pure, and simple delivery augmented by Sheppard's flute, which darts in and out of the melodies, adding radiant filigree.

After two more of her own songs, Sekine closes the disc with Thelonious Monk's "Evidence," giving evidence that she can conjure serious jazz virtuosity when needed. Overall, this CD is upbeat if often gentle, and the recorded sound, produced by Russell Ferrante -- a producer and keyboardist for award-winning albums by the Yellowjackets -- is exemplary. It would be a shame if you missed it.

Be sure to listen to: The title song opens with piano, with guitar entering in such a way that it seems like an extension of the keyboard. Subtle percussion soon arrives, along with wordless soprano from Sekine. It's dreamlike in the best sense, with a crisply recorded guitar solo finally dispelling the mist.