Jamie Ousley: "A Sea of Voices" 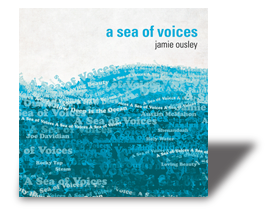 Spiritual Jazz for an Environmental Mission

Every once in a while, though not nearly often enough, I hear a disc that quietly asks me to stop the whirling gears in my brain and just sit still and listen. A Sea of Voices proved to be that kind of disc, one that went beyond mere music to become a spiritual experience. I wasn't surprised, then, to find out that Jamie Ousley has been playing many jazz concerts in churches, reviving a tradition of past years, and that his disc is produced not for profit but to raise funds for the Sunshine State Interfaith Power and Light organization, which has an environmental mission to "mobilize faith communities in Florida to care for creation."

Ousley has played double bass with such well known artists as George Shearing, Benny Golson, James Moody, Eddie Gomez, and Randy Brecker and is professor of jazz bass at Florida International University in Miami, touring nationally with his trio (Joe Davidian on piano and Austin McMahon on drums). For this special recording, he's added vocalist Nanami Morikawa, percussionist Carlomagno Araya, and pianist Gabriel Saientz to the mix. The group recorded A Sea of Voices mostly in Boston, with some sessions and mixing in Florida.

The most incredible spiritual track on this CD is "Shenandoah," one of my all-time favorite traditional songs. I must have heard dozens of versions, but I'll always go out of my way to hear another one. This take, which contains just Ousley's bass and Morikawa's voice, is simple yet profound in its intimate approach. The bass starts a gentle, undulating ostinato; then the voice enters with wordless comments. Morikawa gently sings the first two verses in a lovely pure soprano, and Ousley takes the melody for the third, playing in the high, often unused, register of the bass. They then combine in close harmony for the final verse.

The sound throughout the CD is very consistent, even though they recorded some of the pieces at different locations. There's also good balance among bass, piano, and drums. I felt that the sound needed just a touch more presence, but it certainly sounds agreeable and acceptable the way it is.

The overall theme of the album is water, which Ousley celebrates with several compelling numbers including "Hymn of the Tides," "Loving Beauty," and "Holy Water." Along the way you'll find pianist Davidian's arrangements of Irving Berlin's "How Deep Is the Ocean?" and Coldplay's "Swallowed in the Sea." Ousley probably has the right idea in playing churches, because while his subtle jazz would fit in a club, clinking glassware and background conversations would diminish its effect. It's not music for the car; it's music for a quiet listening room, and for the soul.

Be sure to listen to: You might have been led to believe, as I was, that "Rocky Top" is a bluegrass-country song (my favorite version thus far has been by the Nitty Gritty Dirt Band), but on track 5 Ousley and his fellow musicians might thoroughly convince you that the song has jazz roots.