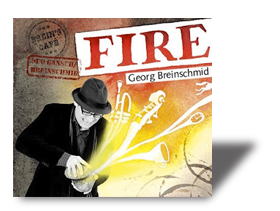 The word that best describes Georg Breinschmid's music making is virtuosic. When you start casting around for other descriptives, there are so many musical styles in his work that no one word gives an accurate picture. Before playing the music he does now, Breinschmid played bass with classical orchestras, including the Vienna Philharmonic, and he has brought some of his classical training to his new ventures. Jazz is the umbrella, and tumbling out from beneath it are elements of polka, waltz, musette, Wienerlied, czárdás, and samba.

Only a real virtuoso could pull this off so successfully, and Breinschmid makes his acoustic bass produce sounds I never thought possible. He tosses off rapid passages with the aplomb of a diva nailing a coloratura aria. He is working with two groups on this disc: one is Brein’s Café, a trio with Frantisek Janoska on piano and brother Roman Janoska on violin; the other is a duo with singer and trumpet player Thomas Gansch. Breinschmid can be really funny as in "Jazz-Gstanzln," a song about a waiter wanting to play jazz: "I slice sausages up into decograms every day there and wistfully think about Chet Baker." If you speak German, you'll probably find these vocals even funnier. Translations are provided for the lyrics but not for all the spoken intros.

No translation is needed for the virtuoso instrumental pieces like "Schnörtzenbrekker" and "Nóta/Csárdás." The latter has Roman Janoska fiddling like a fiend bent on breaking every speed record in the book. And you know, I think he does. There are mellow moments, too, such as "Sweetie," written, the notes tell us, for Breinschmid's girlfriend.

The recordings are exceptionally clean and well balanced, especially when you consider that most of them were made on location and live. Give this virtuosic and zany disc a listen. Oh, it also comes with a four-track bonus disc, so in keeping with the artist's sense of humor, the spine lists it as 1 1/2 CDs. The thank-you notes credit Thomas Edison for "great lighting."

Be sure to listen to: Track 6, "jaBISTdudenndeppat," which tackles some pretty crazy time signatures like 25/16 and 15/8, contains a crazed reference to Beethoven's 9th Symphony like you've never heard it. Irreverent? Maybe. Effective? Most definitely!