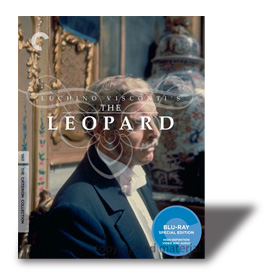 I’ve often proclaimed Criterion the master of black-and-white transfers. And after the Criterion release of Luchino Visconti’s 1963 movie, I’m tempted to add color transfers as well. The Leopard, based on Giuseppe Tomasi di Lampedusa’s novel, deals with the waning of the privileged classes in 19th-century Italy, and it focuses on the life of Don Fabrizio Corbera, Prince of Salina (Burt Lancaster). Corbera represents the old nobility, whereas his nephew, Tancredi Falconeri (Alain Delon), stands for a new military order. The story opens just as Giuseppe Garibaldi has made his famous landing on Sicilian shores in 1860.

The production goes for ultimate opulence, and the picture is exceptionally deep and rich. The interior colors -- reds, golds, and browns -- would almost seem oversaturated if they weren’t so steady and the skin tones so natural. It’s as if an oil painting with colors a little deeper than life has suddenly come alive. The focus is also exceptional, and there are numerous shots in Corbera’s castle where the camera points down seemingly endless hallways and shows the near and far with equal detail. You can’t achieve this on DVD, even using the best upconverting player. The sound is optical mono of the period, and though it’s entirely serviceable, you’ll wish for stereo when you hear the lush Nino Rota score, which is among his most impassioned works. Criterion presents the restored feature at a Super Technirama aspect ratio of 2.21:1 and the American version at 2.35:1. There’s some debate over the first aspect ratio, but the transfer was done under the supervision of the movie’s original cinematographer, Giuseppe Rotunno. I’m inclined to go with Criterion.

As is often the case with Criterion, the extras illuminate and enhance your enjoyment and appreciation of the film. Lancaster spoke in English while the rest of the cast used Italian. The original version, then, is in Italian with English subtitles and has Lancaster dubbed. The second disc presents the American version, which keeps Lancaster’s voice and dubs the rest of the cast. It’s also cut by 20 minutes, and Criterion hasn’t given it the same loving care and restoration as the original movie. A Dying Breed: The Making of "The Leopard" is an hour-long documentary containing interviews with lead actress Claudia Cardinale, formidable screenwriter Suso Cecchi D’Amico, and many others. There are other interviews and period trailers, but the jewel among the extras is a full-length commentary by film historian Peter Cowie, who notes the differences between the novel and film, often using direct quotes. Overall, this Criterion Blu-ray stands head and shoulders above its own previous DVD release.

Be sure to watch for: Most of the movie takes place indoors, but there are exteriors that are simply breathtaking. Chapter 8 is a case in point, as it depicts a picnic that seems taken from a painting. Once the table cloth is spread in the shade, note how the characters move in and out of shadow in great detail. A properly adjusted monitor will show this scene with ideal contrast and no murkiness.