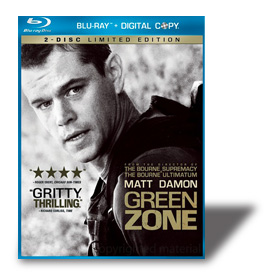 Director Paul Greengrass has directed Matt Damon in the last two Jason Bourne films, and you might say the two practically breathe in synch. Though Green Zone drops the pair into a different theater of war, it has a lot in common with The Bourne Supremacy and The Bourne Ultimatum. It puts Damon on camera for about 90 percent of the film, and he controls every bit of that percentage. The action is fast-paced and violent, and handheld camera moves and first-rate editing make it both exciting and intimate.

Damon portrays Roy Miller, a US Army officer in Iraq shortly after the overthrow of Saddam Hussein’s government. All of the military teams are bent on uncovering WMDs (weapons of mass destruction) to justify their invasion. But after coming up empty on a few raids, Miller suspects that he’s receiving false intelligence reports, and he sets out to find the truth. He’s aided by Martin Brown (Brendan Gleeson), a rumpled veteran CIA man who knows the lay of the land and its politics, and he’s countered at every step by Clark Poundstone (Greg Kinnear, playing beautifully against type), a government official who might have something to hide.

Baghdad at night is all shadows and mystery, a dark and scary place that Greengrass has filmed with authenticity. A lot of his camera work looks like news footage, which gives the images a sense of reality. Night scenes have lots of grain, and most daytime shots are bleached out to convey the arid nature of the terrain. The Blu-ray transfer is faithful to the original film every step of the way. The photography isn’t pretty, but it’s mightily effective. The DTS-HD Master Audio soundtrack is a constant wonder. There’s a lot going on, and the entire soundfield is active without any detail getting lost in the shuffle. Dialogue is clean and clear, gunfire and explosions have a crackling presence, and atmosphere is ever present.

The U-Control extras are generally informative and entertaining. Damon and Greengrass pull off an intelligent commentary, not just for the feature but also for a selection of deleted scenes that, though good, were obviously cut to balance the film. You can see the two onscreen, picture-in-picture, and for the deleted scenes they’re joined by Greengrass’s son. There’s also a U-Control mode that features picture-in-picture explanations and technical information. Two short featurettes concentrate on the real-life soldiers who were employed both as actors and technical resources.

Green Zone is a gripping thriller that also offers an astute social commentary on recent events. With its superb acting and directing, I can’t imagine why it had such a short theatrical run, but Universal has made up for it with this rich and detailed video presentation. The package also includes a digital copy of the film.

Be sure to watch for: Chapter 3: In a long shot, helicopters zoom into the frame from behind. You hear them an instant before you see them, and once they land the sound is plentiful but so carefully mixed that everything is clear. The Blu-ray also showcases incredible video detail in this outdoor sequence.