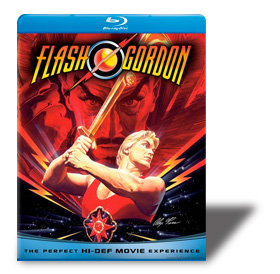 Pathetic Earthlings, What Will You Do with Your DVDs of Flash Now That a Definitive Blu-ray Has Landed?

When Flash Gordon was first released in 1980, theatergoers were on a Star Wars rush, and the movie earned only a fraction of what producer Dino De Laurentiis had expected. Audiences scoffed at its score (by Queen), retro special effects, and lack of big-name actors, even though the music and elaborate sets and costumes made it clear that this film was a comic-book rock opera and a campy indictment of the ’30s. Meant as mere entertainment, the film was to be enjoyed rather than dissected.

But despite its disappointing theatrical sales, the movie gathered a large cult following, finally acknowledged by Universal several years ago when it released the Saviour of the Universe edition, which featured a new digital transfer to showcase the movie’s visual and aural delights. This Blu-ray seems to have been created from the same elements and has the same cover art, though “Saviour of the Universe” has been dropped from the title. The DVD was excellent, but the Blu-ray is outstanding.

I’d recommend watching the most useful extra, the initial episode of the 1934 Flash Gordon serial starring Buster Crabbe, before the feature. Then you can appreciate how the creators of the 1980 version paid homage to the original. Perhaps most enjoyable, after the incredible colors and Queen’s pulsing rock score, is Max von Sydow’s tour de force performance as Emperor Ming, Ruler of the Universe, a bad guy you’ll love to hate. The veteran actor delights with every word and campy action, and his voice alone is almost enough to carry the movie. We’re introduced to that sonorous instrument at the beginning of the film as we see Earth through the eyes of Ming. He unleashes winds, earthquakes, and hot hail on the planet in a sadistic cat-and-mouse game. “I like to play with things a while . . . before annihilation,” he says in one of many campy lines you’ll find yourself quoting.

As hinted, the video transfer is as close to perfect as we’ll probably ever see for this movie. The colors are unusually rich and deep, with no bleed or shimmer. The picture manages to be super sharp as well, without any application of edge enhancement. The dominant reds are hot throughout the movie, while flesh tones remain entirely natural. The DTS-HD Master Audio sound is robust and clean with more surround than you might expect from a film originally advertised as Dolby Stereo. Taken all together, the picture and sound are exceptionally appealing. Even if you don’t appreciate the camp on screen, you’ll have to admit that it looks drop-dead gorgeous. Flash Gordon could become a favorite demonstration disc for showing off your new monitor and sound system.

There’s not much in the way of extras beyond the already mentioned serial episode, just two ten-minute interviews with comic-book artist Alex Ross and screenplay author Lorenzo Semple Jr., and a trailer presented in very poor SD video. But at least it makes you realize the depths the restorers have gone to in providing the sparkling HD version of the entire film.

Be sure to watch for: Flash Gordon is rife with scenes that astound with eye-popping color and definition. At the beginning of scene 9, Flash is held captive in a wooden cage on Prince Barin’s (Timothy Dalton) planet. The natural wood tones set off Barin’s “ready to play Robin Hood” green tights and Flash’s red tank top and bleached-blond hair. The depth of field is so focused that this scene, in the company of most of the larger-scale portions of the film, has great depth.