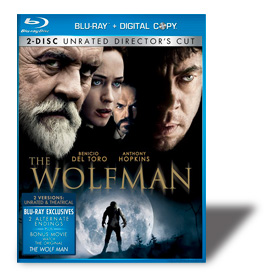 The best thing about this double-disc Blu-ray set is one of its extras, George Waggner's original 1941 film The Wolf Man, starring Lon Chaney Jr. Though the remake has shortened the original three-word title to The Wolfman, it has expanded the story at every turn, often gratuitously.

Chaney's performance in the original shows great depth and heart, and the black-and-white-era star was supported by a handful of A-list actors, including Claude Rains and Ralph Bellamy. Underpinning the fine acting is Curt Siodmak's screenplay, which worked around censorship issues of the day to create a compelling psychological subtext that raised the movie far above the usual slice-and-dice monster flick.

Unfortunately, the inclusion of the original film as an extra presented quite a few problems -- at least for me. Instead of including the extra on a third disc, Universal offered it as a BD Live streaming download. I have four Blu-ray players, and each reacted in a different manner despite being connected through the same basic Ethernet system. The Sony PS3 aced it, loading the movie quickly and streaming it smoothly in crisp, well-defined video. The Oppo BDP-83 produced a splendid picture, but it occasionally froze for three or four seconds. The Panasonic DMP-BD55 streamed the feature without issue, but its picture was soft and marred with squiggly video noise. The picture was so distressing, in fact, that I decided to pick up a Sony BDP-S270 to replace it, only to find that my new player didn't show the extra as a clickable option! I'll be making some calls to Oppo and Sony, as I imagine the firmware needs updating.

The new movie isn't as bad as many would have you believe. It boasts stunning photography and meticulous period detail, and it adds some interesting ideas to the plot. For one, Lawrence Talbot's father is also a werewolf, which allows for a grand final battle between father and son. Benicio Del Toro isn't as deep as Chaney in his portrayal of Talbot, but he nails the crucial pivot point and makes us care about the character. Though he's undeniably a monster, he's also the hero of the movie, and we root for him, hoping he'll find a cure for his affliction. Anthony Hopkins is fascinating as Talbot's father, and he gives a performance so sly and layered that you'll wonder about his real motives. Rick Baker's special makeup is beyond reproach, and the special effects blending live action and CGI are smooth and seamless. The Blu-ray presents a director's cut that's 16 minutes longer than the theatrical version, which is also on the disc. You might assume it has more blood and gore, but it actually adds more dialog, which creates better character depth.

The Blu-ray transfer is gorgeous most of the time. The ever-present shadows are always alive with detail, and the inky blacks are perfect for a large display, especially a plasma. Daylight scenes are filtered toward blue, but the colors still seem natural. The picture occasionally goes soft or grainy, and this inconsistency is the only factor keeping the picture quality from a higher rating. The sound is aggressive during action scenes, and it wraps around the viewer. And though the dialog is often soft, I had no trouble understanding it. It's a good test to see if your center speaker is properly balanced. There are some decent production featurettes, and the Universal U-Control disc offers some interesting picture-in-picture commentaries for the theatrical version. One set of commentaries features Rick Baker and others explaining the special effects, while the more interesting "Legacy, Legend, and Lore" compares the new and old versions of the film and discusses werewolf facts and fiction. And for those who would like to take The Wolfman wherever they go, there’s a digital copy included. There are also two alternate endings, each so bad that I almost forgot them. The director made the right final choice, and the Blu-ray offers proof.

Be sure to watch for: One of the best things about the new version is its moody action-adventure sequences. The best of these occurs in chapter 14 as Talbot changes into the monster and escapes from the asylum where he was imprisoned and tortured. He races across the rooftops of London and climbs on top of a griffin statue to howl at the moon, creating a memorable iconic image. This scene is extended in the director's cut.