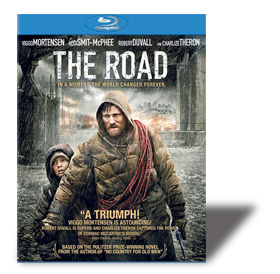 Last winter, as the record-breaking snow piled up, it seemed that we might never see the sun again. Of course, we knew it would return, and the world would once again turn green. But what if the miracle of spring never happened and every gray day was followed by another? Would hope vanish?

The Road, based on Cormac McCarthy's novel of the same name, offers an idea of what life without spring might be like. We never learn the cause, but the earth has plunged into a dim, cloudy winter. The planet is dying, the skies are gray, and the vegetation is brown and rotting. A man (Viggo Mortensen) and his son (Kodi Smit-McPhee) plod down a lifeless road, pushing a shopping cart filled with meager supplies as they head for the coast. The situation is so grim, we’re told, that starving survivors have turned to cannibalism, and the man carries a gun with two bullets -- one for him and the other for his son. They won’t be eaten, nor will they eat people. The man tries to teach the boy that cannibalism is wrong and that they must maintain their humanity.

It’s hard to judge the video transfer for this Blu-ray. Director John Hillcoat has aimed for a limited color palette of gray, brown, and yellow, with an occasional orange glow provided by fire. Given that, the transfer is probably a very accurate representation of the theatrical release, though it seems soft in places, more like newsreel footage than feature film. The soundtrack, however, is very robust. The dialogue is often quiet and you'll need to turn up the volume, but the groaning of earthquakes and cracking of falling trees have a great deal of presence, and they accentuate the horrible events on screen.

Extras include an off-the-cuff commentary from Hillcoat, five deleted scenes, a typical back-patting production featurette, trailers that prove no one knew how to market this movie, and five trailers for other films.

This isn't a movie you'll want to rent or purchase for its technical wonders. It is worth seeing, however, for its disturbing, realistic message, as well as for the acting of Mortensen, who skillfully underplays the story. Smit-McPhee is also good, and he and Mortensen are a believable father and son.

Be sure to watch for: In chapter 10, the man and the boy encounter an old man (Robert Duvall). The ensuing ten-minute conversation showcases some of the best ensemble acting I’ve ever seen. Three generations, five-star acting.