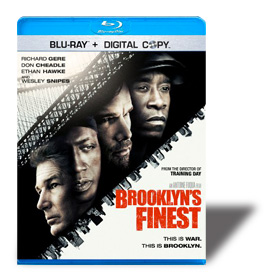 Brooklyn’s Finest is a gritty portrait of police life, and regardless of its authenticity, it seems real as can be. After discovering first-time screenwriter Michael C. Martin’s script, director Antoine Fuqua secured a quartet of first-rate actors from whom he wrestled performances beyond what audiences might expect. The movie shows the hardships, frustrations, and temptations that cops in Brooklyn (or anywhere) must face, telling three distinct stories that converge in the film’s final moments.

Ethan Hawke, always reliable, transcends his own abilities as Sal, a man with more children than he can support and two more on the way. His story is heartbreaking, and Hawke realistically portrays an intrinsically nice guy who is tempted to cross the line. Don Cheadle stars as undercover cop Tango, who gets close to drug kingpin Caz (Wesley Snipes) in an effort to entrap him, only to find that Caz isn’t such a bad guy after all. Richard Gere rounds out the main cast as Eddie, a burned-out officer on the verge of retirement. Though he finds some solace in the arms of a prostitute (Shannon Kane), his despair is so overwhelming that every morning he puts an unloaded gun in his mouth and pulls the trigger. Even after watching the extras, you’ll have a hard time figuring out how Fuqua wrings such realistic, emotional, and intense performances from the entire cast. Then again, he directed Training Day, for which Denzel Washington earned an Oscar.

The movie comes to Blu-ray looking close to perfect. Outdoor scenes have depth and amazing focus, while indoor scenes have dark shadows with good definition. Skin tone is excellent throughout, and the colors are potent. The sound has lots of dynamic and frequency range, including a pounding LFE track, but the surrounds could have been used with more imagination. The sound also has some inconsistency, as gunshots sometimes ricochet to the back, while other times they don’t. It’s a solid soundtrack that doesn’t detract from the visuals, but it could have added more.

The extras include a dry but informative commentary from Fuqua, a set of fairly fluffy production featurettes, and an interesting set of deleted and extended scenes that enhance the development and understanding of the film’s characters. These are presented as one command and are not available separately on the menu, though you can chapter-stop through them. And just to prove that Blu-ray has come a long way, all of the extras are in HD.

Brooklyn’s Finest is not a perfect film. Its strong acting is lavished on an occasionally clichéd plot, making its parts better than its sum. But those parts remain some of the best I’ve seen in a cop movie.

Be sure to watch for: The production featurettes are in HD, and the outdoor crowd scenes are astonishing. You’ll be looking at the detail in the close-up faces and then suddenly realize you can clearly read store signs across the street.