"Ride with the Devil" 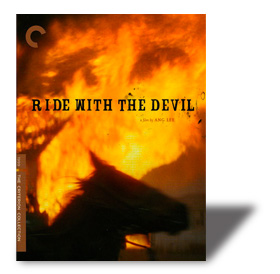 Ride with the Devil was the third English-language film for Taiwanese director Ang Lee, and it was released in 1999, one year before Crouching Tiger, Hidden Dragon made him a household name. Ride with the Devil had a limited theatrical release, making little money despite being favorably reviewed. The studio asked Lee to cut the movie's length before its release, and he agreed, as he was busy working on Crouching Tiger. Now the Criterion Collection has given everyone a chance to see Lee's original version, with the missing footage reinstated.

Based on Daniel Woodrell's novel Woe to Live On, the film is set in Missouri, a northern state that allowed slavery, where gangs of southern bushwhackers and Union soldiers engaged in guerilla warfare. It was one of the bloodiest episodes of the war, culminating in a shameful raid on Lawrence, Kansas, in which most of the town's men were slaughtered with little warning. Tobey Maguire stars as Jake Roedel, a 19-year-old of German descent, who becomes friends with Jack Bull Chiles (Skeet Ulrich), another young raider, and Daniel Holt (Jeffrey Wright), a freed black man. The story revolves around their friendship as they come of age during a tumultuous time in American history, and it's worth more than a passing glance.

Ride with the Devil was beautifully photographed by Frederick Elmes, and its look has been faithfully transferred to Blu-ray. The outdoor scenes have deeply saturated colors that look natural and realistic. Greens especially stand out, and the picture always has good definition. The sound is exceptionally robust, with battles audible from all directions. But even when the action gets frantic, dialogue is cleanly reproduced. Considering that this is a Criterion release, the extras feel a bit skimpy, but they include a retrospective interview with Jeffrey Wright, two commentaries, and essays in the 32-page booklet that shed light on the period.

Restored to its full length or not, I don't think the film is a masterpiece. Still, it's an engaging and faithful look at a time in American history that Hollywood has fictionalized beyond recognition. Criterion has brought it to Blu-ray with respect and care, providing picture and sound that will please anyone, especially those with a large video display.

Be sure to watch for: The opening of chapter 6 is a breathtaking shot of a bushwhacker encampment. The greens are intense and varied, with grass that's darker than the trees. The detail of distant horses, tents, and soldiers is impressive, as is the shadow detail of the creek bank.