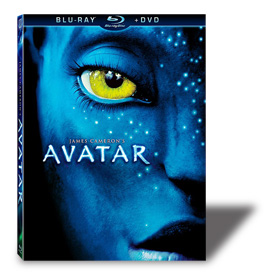 I’m not going to discuss the plot or analyze the environmental themes embedded in James Cameron's latest science fiction picture, except to say that I think the movie succeeds both in its message and as an epic adventure. What's important here is how Avatar holds up on Blu-ray. And just as the movie set new standards for visuals, you can now include Avatar among Baraka, Up, and WALL-E as one of the few contenders for the "best reference disc" title. If you want to wow your friends and family with your large-screen monitor and multichannel sound system, you won't find a better choice.

The movie has been transferred to Blu-ray in 1.78:1 aspect ratio, so it will fill your entire HD widescreen display. I found this very satisfactory, and I didn't feel like I was missing anything from the different aspect ratio used in regular theaters, where the 3D version was 2.35:1. The incredible range of colors is just as eye-popping as it was in the theater, and every scene is packed with impressive HD detail. Moreover, shadow detail is perfect, black level is ideal, and there are no artifacts. The DTS-HD Master Audio sound is also just as good as the picture. The entire 360-degree listening circle is used most of the time, and the sound, whether it’s from quiet wildlife or noisy battles, has wonderful presence. The dialogue is always clear, and scenes with firepower offer some lease-breaking bass without sounding too "bass heavy," as is often the case with SFX films.

There are no extras, but the disc's producers have been quick to point out that there will be a four-disc set down the road, one that will probably contain a slightly longer version of the movie and lots of production featurettes. And though it hasn't been announced, it seems inevitable that there will be a 3D disc set as well -- after all, Avatar was at the center of the theatrical 3D revolution. That's all well and good, but if you need a new state-of-the-art demo disc for your system now, you can't go wrong with this release. A DVD disc is also included, and it's equally impressive -- for DVD. But it's the Blu-ray that raises the bar for audio and video quality. The lack of extras has allowed the entire disc to be dedicated to obtaining ultimate clarity for the film, and that decision has made Avatar the new reference disc on the block.

Be sure to watch for: Avatar is loaded with colors both familiar and not so familiar. And nowhere is this better demonstrated than in chapter 11, when the native woman Neytiri saves avatar Jake from a pack of fierce viperwolves. As the scene begins, it's lit with the angry orange glow of Jake's torch. But after a moment of darkness when Neytiri throws the torch in the water, the scene ends with the more peaceful yet vivid phosphorescent aqua, blue, pink, and purple of Pandora's nighttime forest. Regardless of the color scheme, the shadow detail is reference-level.