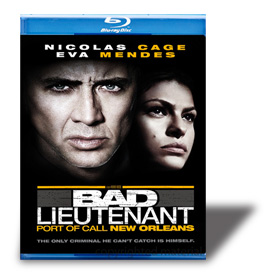 Werner Herzog and Nicolas Cage Explore "The Bliss of Evil"

The opening shot of the neo-noir Bad Lieutenant: Port of Call -- New Orleans, shows a snake slithering through the foul flood waters left behind after Hurricane Katrina, and it lets us know that we’re in for something much darker than the New Orleans of Mardi Gras and jazz greats. When the flood has stranded a prisoner in his cell, detectives Terence McDonagh (Nicolas Cage) and Stevie Pruit (Val Kilmer) watch from above and bet on how long he’ll last before drowning. But McDonagh then jumps into the water to save the drowning man, and for his heroism he gets formal recognition and a bad back that soon has him popping pain pills like popcorn. The prescribed drugs lead to crack, which eventually leads to heroin, and before long McDonagh is filching drugs from the evidence room and apprehending anyone who appears to be holding.

Cage’s performance is a tour de force that's both amazing and perplexing. His mind and body may be twisted, but we’re shown that McDonagh can be a good guy, and Cage channels enough Jimmy Stewart that we’re on his side despite his actions. The movie is a film noir doubling as one of the darkest comedies you’ll ever see, and in the production featurette, director Werner Herzog says it’s all about “the bliss of evil.” Herzog has also insisted that this film isn’t based on 1992’s Bad Lieutenant, directed by Abel Ferrara. Whether you believe him or not, this movie is engaging from beginning to end, and you won’t be able to take your eyes off of Cage.

The production featurette is the disc’s most substantial extra. It’s an entertaining and eye-opening look at an energetic Herzog at work. The other main extra contains a group of photos taken by Herzog’s wife, Lena, including stills from the movie as well as posed-for pictures that are some of the sharpest, cleanest still photos I’ve ever seen on disc.

The overall picture quality is excellent, but it fluctuates (as it did theatrically) with each scene. Garish colors, grain, and doubtful focus add edginess to the movie’s hallucinogenic moments, while natural tones and razor-sharp focus delineate outdoor shots. The soundtrack offers incredibly clear dialogue, and it successfully uses the surrounds for music and the occasional effect. And in case you’re wondering about the iguanas and alligators that this movie is famous for, you’ll notice them all right. There’s no point in stating the obvious, but let’s just say there are worse things than hitting a deer with your car.

Be sure to watch for: Chapter 11, when McDonagh drives across a bridge. The car’s hood and windshield vividly reflect the bridge’s girders. It’s an old cinematographer’s trick, but it’s a good one. And it’s especially well presented on this Blu-ray.