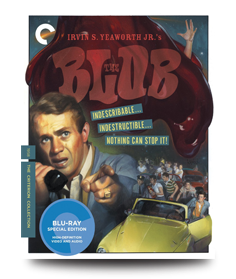 "It creeps and leaps and glides and slides . . ." It's hard not to like a villain from outer space that can be described in a Burt Bacharach-Mack David title song, and it's easy to overlook The Blob's deficiencies, given such an earnest presentation. If it's not a great horror story or an A-list science-fiction thriller for you, The Blob is a slice of Americana and a time capsule to the long past 1950s. In spite of its cheesy special effects (or perhaps because of them), it has become a cult favorite.

The movie opens with a kiss as we discover Steve Andrews (Steve McQueen, billed as Steven McQueen) and Jane Martin (Aneta Corsaut, billed as Aneta Corseaut) making out under the stars at the local "parking place" in a small Pennsylvania town. They see a meteor flash through the sky, striking not far from them. Steve is all gung-ho to find it, so off Steve and Jane go. Unfortunately, an old man (Olin Howland, billed as Olin Howlin) finds it first. A small, spherical ball cracks, and out comes a gelatinous blob that latches on to the old man's arm. Steve and Jane arrive and take the hapless man to the town doctor.

The blob grows in the doctor's office, absorbing the good physician and his nurse. Steve gets wise to what is happening: the gooey blob grows larger every time it feeds. Being a responsible citizen, he tries to tell the police what's going on, but though Lt. Dave (Earl Rowe) believes them, two of his officers know what's wrong. Their diagnosis: teenagers are doing the mischief, making up fanciful stories as a prank. This was a theme in movies of the time, most easily recognized in the more serious Rebel Without a Cause. Teens were guilty until proven innocent. The Blob was aimed, then, at a teenage audience, which in turn made it a success at the box office.

By the time the police finally come to believe Steve's story, the blob has eaten the projectionist and a good-sized percentage of the audience at a midnight horror show. Still hungry, it comes oozing out of the Colonial Theater's doors and heads to the local diner. Nothing seems able to stop it until Steve has a bright idea.

The colors in this spiffy Criterion transfer are especially bright, and they pop most of the time. The first four reels of film were scanned from the original 35mm negatives, but the fifth was too damaged, so the restorers used a 35mm interpositive. It all looks seamlessly great -- a real upgrade from Criterion's previous DVD release. The mono soundtrack has appropriate power and clarity to accompany the sharply etched picture. The main extras are two commentaries: one by the film's producer, Jack H. Harris, and film historian Bruce Eder; the other with director Irvin S. Yeaworth Jr. and actor Robert Fields. Both contain copious information nuggets.

The Blob is an energetic, campy time trip into the days long before CGI came along. It is also prophetic (spoilers ahead!). Steve's bright idea is that cold freezes the blob, so in the final scene a plane deposits it in the Arctic. That will take care of it, right? "Yeah, as long as the Arctic stays cold," Steve says. The Blob must be Al Gore's favorite late Saturday night guilty pleasure.

Be sure to watch for: The only extra, besides the commentaries, a trailer, and a brief essay by critic Kim Newman, is a section of behind-the-scenes still photos and promotional tools. There are posters from several countries that exhibit the lengths artists take to sell a movie to a particular audience. The Belgian Blob, terreur sans nom makes the blob look particularly huge and gruesome, while the French Danger planetaire features McQueen's bared chest.