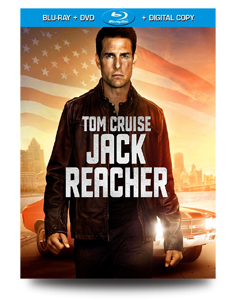 Werner Herzog. He’s a film director extraordinaire, having directed both documentaries (Grizzly Man, Encounters at the End of the World) and fiction adventures (Fitzcarraldo, Nosferatu the Vampyre, Rescue Dawn, Bad Lieutenant: Port of Call New Orleans). He has staged opera at Bayreuth and La Scala, written over 50 film scripts, produced over 20 titles, and has worked in many aspects of film, including sound. This everyman has also acted, and in Jack Reacher, we find him perfectly cast as the Zec, a man who has sacrificed his fingers over the years, proving that he’s willing to go to any length to survive.

Jack Reacher’s interesting casting doesn’t stop there. Robert Duvall is on board, playing the proprietor of a shooting range, who also proves to be a crack shot himself. The ever-effective Richard Jenkins is on hand as a politician whose daughter (Rosamund Pike) wants to score points as a defense attorney. Australian Jai Courtney, sporting a near-perfect American accent, is one of the Zec’s chief enforcers, coming across as an all American killer.

The star, of course, is Tom Cruise, who took on the role of Reacher in spite of the fact that his physical description is totally opposite that in Lee Child’s books about the former military policeman, now an imperfect investigator and hero. And you know, he pulls it off. Losing, to Cruise’s Reacher, is not to be considered, but rather than swagger, he stands solid in the face of his enemies. Reacher isn’t really looking for foes. He always gives them a chance to walk away, but is fully up to a fight if they pursue that course of action. He’s also got a brain that is masterful at putting disparate clues together to create a solution. Clues like: why did the killer put a quarter in the parking meter before he unpacked and started shooting?

The producers chose to use Child’s One Shot for the plot of its initial film in a projected Jack Reacher franchise. In an exceptionally clever and tautly edited opening, a sniper shoots five people, seemingly at random. Called in to help out, Reacher soon discovers that four of the victims were killed to cover up the identity of the real target. And from that point on, things get complicated.

The Blu-ray presentation of Jack Reacher is near perfect. I simply cannot fault the picture in any way. Whether revealing every pore of a face or the details of a waterfront, the image is highly detailed. Colors and contrasts are perfect. It’s the kind of film you can show to your friends that might convert them to big-screen HD. The sound is perfect, too. Everything matters on this soundtrack, be it a whisper of dialogue or the crack of a rifle shot, yet all the details are edited into a cohesive whole.

The extras are fairly plentiful. There are two commentaries. One is with director Christopher McQuarrie and Tom Cruise; the other with Joe Kraemer, the composer of the film’s effective music. The latter is like a music-only track with occasional commentary during the silent spots that provides interesting insight into the process of composing film music. There are also the usual production featurettes including one fairly interesting one with author Child talking about his Jack Reacher franchise; but with this release it’s those commentaries that make the strongest impression.

Jack Reacher is an entertaining and suspenseful crime procedural that features many memorable characters and an absolutely perfect villain. It is, technically speaking, one of the most impressive looking Blu-rays out there and should be very entertaining when seen on a good home-theater system.

Be sure to watch for: Chapter 5 begins with a shot of Reacher walking across the street to go to a bar. It’s night and it has just rained. The shadow detail in this scene is exemplary. Check out the shop fronts fading off into the distance.