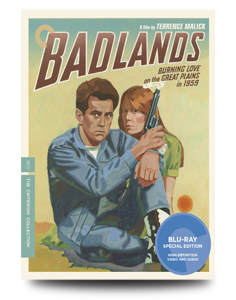 In 1973, Badlands established Terrence Malick as a new director to be noticed and launched the careers of Martin Sheen (Kit) and Sissy Spacek (Holly). It was Malick's first feature film, based on a killing spree by teenager Charles Starkweather that occurred in the late 1950s. Starkweather and his 14-year-old girlfriend, Caril Ann Fugate, fled Lincoln, Nebraska, after Starkweather killed Fugate's mother, stepfather, and two-year-old stepsister. While on the run, Starkweather killed seven additional victims but was caught and sent to the electric chair on June 25, 1959. Fugate protested that she had been Starkweather's captive, but the court didn't buy it and found her guilty as an accessory. She served 17 years in prison.

The Starkweather-Fugate story has served as the inspiration for a number of films, among them The Sadist, Kalifornia, and Natural Born Killers. Stephen King claimed Starkweather was an influence in his work, citing The Kid, a character from The Stand, as being directly modeled on the teen killer. Though most of these inspired creations, as well as many other copycat ones of lesser quality, dwell on the evil nature of the murderer, Badlands is set forth as a sometimes-misty romance about teen love and alienation. With gunshots.

Malick's camera can make the worst violence look beautiful. In Badlands, when Kit burns down Holly's house after killing her father, the fire is so rhapsodic and beautiful that you can almost relate to pyromaniacs and their fascination with flames. The murders are dispatched with efficiency and without much blood. In Malick's film, Holly isn't kidnapped -- she's a willing passenger, though she doesn't participate in any of the killing. Her narrative voiceover, which ties the film together, cites Kit as "trigger happy," a very naïve interpretation of his actions. Sheen and Spacek are simply perfect as Kit and Holly. Though each was an adult at the time of filming, they look and act naturally, like the much younger couple.

Adding to the fairytale atmosphere of Badlands is the choice of music, including a recurrent theme by German composer Carl Orff. (You can watch an incredibly effective contemporary performance of this score on YouTube.) The music is beautifully reproduced by one of the better-sounding monaural soundtracks I have ever heard. That theme is played under the end credits, so you leave the theater with the sound of all those vibraphones gently ringing in your ears. As to the picture quality, it's yet another Criterion triumph, ranging from very good to breathtaking.

The extras are good but not as plentiful as those on some other Criterion releases. There's no commentary track, but there is a 42-minute retrospective with Sheen, Spacek, and art director Jack Fisk (who Spacek met on location and later married). There's also a 1993 episode of American Justice, which tells the true story of Charles Starkweather, and an interview with executive producer Edward Pressman. But the most interesting interview for me was one with associate editor Billy Weber, which really shed a lot of light on the editing process in general and on working with "Terry" Malick specifically.

Badlands is a must-see movie: a romantic, at times dreamlike telling of a gruesome story. Even if you don't get what it's about, it's simply beautiful to see.

Be sure to watch for: There are a number of gorgeous scenes you could cite for this film. I'll pick the one in chapter 2 where the camera ends on a long shot of Holly's father painting a billboard in the middle of nowhere against a background of a lightly cloudy, intensely blue sky. It's like a postcard of a guy painting a postcard, showing rich colors and first-rate Blu-ray definition.