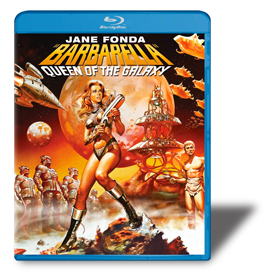 There's junk and then there's junque. Some of us might call the latter a guilty pleasure, and for me 1968's Barbarella surely falls into that category. Objectively I'd use a string of derogatory adjectives to cite the movie's mistakes, missteps, and misalignments. But on a personal level, I love Barbarella. It pairs with Flash Gordon (the feature-length color movie) as one of the best brainless yet appealing space operas ever made. Roger Vadim was the director, and he attempted to do for his third wife, Jane Fonda, what he had done for his first wife, Brigitte Bardot, by reducing her to a blonde sex object. Barbarella was based on a French comic strip of the same name, created by Jean-Claude Forest in 1962.

The opening striptease aboard Barbarella's ship, greatly aided by zero gravity, is a soft-porn classic, and Vadim goes to great lengths to unclothe Barbarella (to call Jane Fonda's outfits skimpy would be an understatement) for the rest of the film. But despite his efforts, Fonda's wide-eyed innocence makes us like her as kitten just as much as sex kitten. She lights up the screen, so it's very fortunate that she's onscreen almost the entire time.

The only actor to steal equal time from Fonda is David Hemmings as Dildano, an impotent revolutionary. The ten-minute scene for Barbarella and Dildano is the best part of the movie. Milo O'Shea is also very effective as the villain, Dr. Durand-Durand, his character influencing rock band Duran Duran, who dropped the hyphen and changed the spelling.

Like Flash Gordon, Barbarella is a feast for the eyes as far as color is concerned. The design reminded me of early Technicolor with its bold colors and clashing palettes, often shot against a shag-carpet background. Shags were popular in the 1960s and also very inexpensive. Barbarella's ship is wall-to-wall shag, which no doubt helped the producers keep costs down. The outrageous colors of Barbarella have been successfully brought to the Blu-ray Disc, which boasts a rich and detailed picture belying the original's age. The soundtrack is perfectly adequate for dialogue and the outright cheesy music score. Paramount, by the way, remains one of the few producers to choose Dolby TrueHD over DTS-HD MA. The sole extra, a trailer for the film, is scarcely worth mentioning.

Since new generations have probably never seen Barbarella, I'd advise a rental rather than a purchase until you decide whether the campy movie is junk or junque.

Be sure to watch for: One of Barbarella's first big adventures happens on an ice planet, where she meets a group of bad children who remote-control even worse dolls. As the dolls approach, the camera gets closer and we clearly see their metallic, razor-sharp teeth. This is a genuinely frightening scene, and the only one in the movie that really scares.