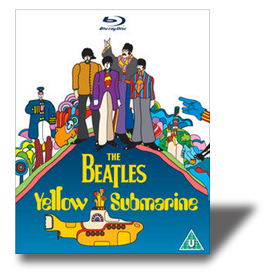 This Blu-ray Restoration Is a Resounding Success

The famous Beatles song conjures visions of colors both intense and unexpected. We all know that submarines aren't supposed to be yellow, but the one in this animated classic is, in different shades too, and with red piping. The new 4K Blu-ray transfer, meticulously cleaned up by hand, frame by frame, abounds with vivid, eye-catching colors that pop in HD.

The plot is simple. The Blue Meanies have invaded Pepperland, home of Sgt. Pepper's Lonely Hearts Club Band, and brought a monochrome look to a once colorful world. Since they bear an uncanny resemblance to the members of the band (being really one and the same), the Beatles are brought to Pepperland aboard a yellow submarine in order to save the day. On the way to their destination, they pass through various seas and undertake different adventures. These mostly serve to set up performances of some of the Beatles' best songs.

Everything is colorful, even the villains. The Blue Meanies have dark blue bodies; stockings that are striped red, orange, and yellow; and blue faces with prominent red lips, yellow teeth, and lolling red tongues! We learn in the extras that these nasty folks were originally meant to be red, but a copyist accidentally colored them blue and the look stuck. Overall the movie paid tribute to the psychedelic craze of the '60s and broke new ground for animation. It now stands as a milestone in the history of animation, a rock-solid production that's just as entertaining today as when it was released. 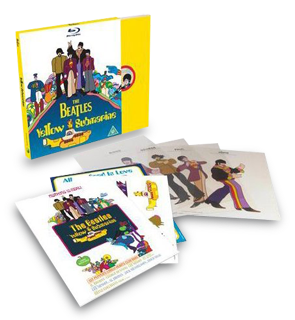 The restoration is a revelation in many ways. The picture is free from any dirt or grit, except for two brief moments of shimmer during part of the "Sea of Holes" sequence. It is beyond reproach, state of the art, a real knockout. The sound, which is just as impressive, is presented in the original mono, PCM stereo, and a DTS-HD MA 5.1 mix. In the DTS-HD mix the voices are crystal clear, the instruments solid, and the imaging exceptionally imaginative. Sounds emanate not only from the rear but also from different places on the side of the soundfield, where there are no speakers in my 5.1 system! In fact the vocals, dialogue, and sound effects never seemed to be coming from any speaker at all, but from pinpointed locations spread around the 360-degree field.

The extras include an in-depth commentary with production supervisor John Coates, with an ending bit by designer Heinz Edelmann; a period featurette; the original trailer; storyboard sequences; original pencil drawings; and more. Also included are reproductions of transparent animation cells of each of the four Beatles, collectible stickers, and a beautifully designed booklet with a forward by Pixar's John Lasseter.

Yellow Submarine on Blu-ray is a disc that can be enjoyed over and over for its entertainment value, but for those with serious home-theater systems it is a must as a demonstration disc. Play "Lucy in the Sky with Diamonds" or "Eleanor Rigby" and watch everyone's eyes light up as they're seduced into rapt attention. It's destined to be one of the discs of the year when awards time rolls around.

Be sure to watch for: Chapter 5: Sunrise in London reveals more and more shadow detail as the sun rises. Loud toots from factory whistles and we're into "Eleanor Rigby" in the best mix I've ever heard, even better than that on the newly mastered CDs.