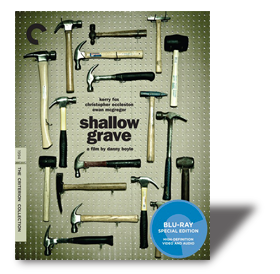 In choosing scripts, director Danny Boyle has pursued several different paths, but one theme he returns to is money and what it does to those who acquire it. This idea drives Shallow Grave (1994), Boyle's impressive first film, and recurs in Millions (2004) and Slumdog Millionaire (2008). The latter two aren't nearly as nasty as the first, which is a jolt of adrenaline administered with glee. It's a nasty, taut, thriller with a literate script, flawless ensemble acting, breathless pacing, and spooky camera angles. I remember surrendering totally when I first saw it, saying to myself (and others) -- that director is one to watch. Shallow Grave blew me away then, and Danny Boyle is still a director to watch.

Shallow Grave focuses on three 20-something roommates living in a spacious apartment in Glasgow. Juliet Miller (Kerry Fox) is a doctor, David Stephens (Christopher Eccleston) is an accountant, and Alex Law (Ewan McGregor in an impressive feature-film debut) is a somewhat sleazy journalist. At the beginning of the film, the three interview prospects to fill a spot as their fourth roommate. The nod goes to Hugo (Keith Allen) who dies right after moving in, leaving behind a mysterious suitcase full of money, no doubt procured through illegal activities.

The three spend very little time before deciding to do the next wrong thing -- they'll chop Hugo up, bury him, and keep the money. This decision starts the ball rolling downhill for the hapless trio, but to tell more would be to spoil the suspense and fun. Shallow Grave is a cruel black comedy with terribly acerbic jokes. The most memorable occurs as Juliet begins to think she can't go through with butchering Hugo and Alex quips, "But you're a doctor, you kill people every day." The three roomies are not terribly nice people, but they're interesting and their actions, interactions, and antics will hold you in rapt attention until the very last frame.

As expected, Criterion has done a bang-up transfer for Shallow Grave, providing a rich and colorful picture that has the sharpest detail and a soundtrack that is clarity itself. It's no wonder that many folks tried to buy the apartment, not realizing that it was actually a set. It looks that coherent and appealing.

Director Boyle narrates one commentary track, and producer Andrew MacDonald and writer John Hodge handle the other. Both tracks are amiable, enthusiastic, informative, and well worth hearing. Other extras include interviews with the principal actors, a 1993 documentary on making the film, a video diary from the 1992 Edinburgh Film Festival, a trailer, and a written essay by critic Philip Kemp.

If you haven't seen Shallow Grave, put this Criterion edition on your "must see" list. If you've already seen it, you might very well have it at home already. It's one of those movies you can lose yourself in for many hours.

Be sure to watch for: As Hugo is going through the interview process, he's asked if he has killed anyone and we see a flashback to an ATM robbery in which someone was bludgeoned to death. We see it, though, from inside the ATM machine, with all the words on its screen properly backwards. Nowadays we know that these machines contain security cameras that film every transaction, but back then it was a novel idea to show the scene from this perspective.