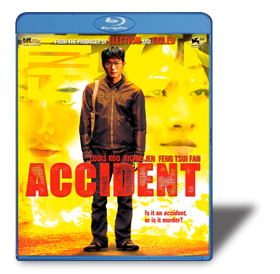 A Stylish Thriller from Hong Kong

Hong Kong director Pou-Soi Cheang came to Accident with the highly regarded Shamo and Dog Bite Dog under his belt. He is credited simply as Soi Cheang for this film, which is a stylish, suspenseful, and twisting thriller that's marred only by its ending. That said, this 2009 movie is well worth seeing for its impressive build up and its clever, intricate set pieces.

Ho Kwok-fai (Louis Koo), "The Brain," is a professional hit man running a crew of hit men who create assassinations that look like accidents. Their hits are carefully choreographed in the manner of the Final Destination movies. Event one causes event two, which causes event three, which causes event four, which causes the murder, and no one can tie the final action back to the first. But when one of the assassinations goes wrong, Brain is convinced it's because someone else choreographed the failure. He becomes so paranoid that he identifies, for no particularly good reason, Chan Fong-chow (Richie Ren, listed in the film credits as Richie Jen) as the mastermind trying to flip his lucrative cat-and-mouse business on its back.

All the events are shot in state-of-the-art video that delineates every detail, even in shadows. Color is slightly desaturated but still warm enough with excellent skin tones. The sound is very precise, and the viewer is aware that every drop of rain, every screeching tire, each body thud, and every piece of shattered glass has been carefully placed within the 360-degree soundfield. The music, often dropped in favor of sound effects, is also precise in reinforcing the visuals.

Accident is presented in the original Cantonese DTS-HD 5.1 soundtrack, with crisp, easy-to-read subtitles. There is no English-dubbed track, but since much of the mood is created without dialogue, strangers to subtitling will never feel like they're "reading a movie." The one extra, a short production featurette, isn't so bad, but for American audiences the inclusion of something more about the excellent actors and Hong Kong cinema in general would have been worthwhile.

With its amazing camera angles and its tight, rat-a-tat editing, Accident is long on style with content to match, until the end, which suddenly turns romantic and is almost apologetic in its denouement. But surely this was planned, too, or was it just meant to look like another accident?

Be sure to watch for: One of the biggest set pieces happens at midpoint in the film during a driving rainstorm. Though the rain is coming down in sheets, with sound helping to make it feel quite tangible, details of the action are perfectly clear. It's a very impressive scene, and one that sticks in the memory.