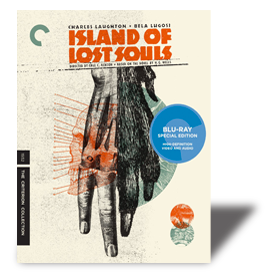 Q: Are We Not Men? A: We are Devo! seemed an odd title for Devo's debut rock album in 1978, but one of the extras on this disc clears up the matter, as Devo members Gerald Casale and Mark Mothersbaugh recall their love and reverence for Island of Lost Souls. Now Criterion has made it possible for everyone to experience it as one of the greatest horror films ever made.

Though it's been remade several times (catastrophically in 1996 with Marlon Brando in the lead role), this is the best version despite its nearly 79-year-old status. The plot, adapted from the The Island of Doctor Moreau by H.G. Wells (who was very much alive in 1932 and went on record as hating the movie) concerns a crazy, egomaniac scientist, Doctor Moreau (Charles Laughton), who operates on animals in an attempt to turn them into humans. The pitiful (and frightening) half-and-half creatures seem like mere playthings to Moreau. His casual attitude toward them makes him one of the most sinister and cruel cinema villains (he operates on a screaming creature as if he was simply slicing a loaf of bread). Laughton excels in this wickedness, creating an unforgettable character.

Eventually the beings rebel, led by the Sayer of the Law (Bela Lugosi), who in a climactic scene shouts the phrase that Devo so admired. Director Erle C. Kenton and cinematographer Karl Struss film this scene and most of the others with an impressive and eerie exhibition of shadow and light techniques. Criterion's transfer came from three different sources, each detailed in the disc's accompanying booklet, and though not perfect, it looks better than you might expect from a movie from the early 1930s. Detail is excellent, though much of the movie is shot deliberately soft, and contrast is right on. The mono soundtrack also comes from different sources, and it's clear enough to reveal the subtle verbal nastiness of Laughton's performance.

In addition to the Devo recollection, extras include interviews with film historian David J. Skal and filmmaker Richard Stanley, the director of the ill-fated 1996 version. There's also an entertaining conversation with John Landis, Oscar-winning makeup artist Rick Baker, and horror film enthusiast Bob Burns. It says a lot that Baker, the ultimate makeup man of our time, speaks so reverently of Wally Westmore's makeup work. To cap things off, there's a commentary track with film historian Gregory Mank that's crammed with info, including details of the contest that Universal ran to cast Lota, the Panther Woman (the role finally awarded to Kathleen Burke). Island of Lost Souls was steamy and controversial in its day, and Mank points out all of the scenes that were censored for presentation in one country or another.

Island of Lost Souls is one of the greats of the horror film genre. Thanks to Criterion for making it viable for a 21st-century audience.

Be sure to watch for: Chapter 6 contains many shots involving shadow and light. As characters move away from the doorway to the House of Pain (Moreau's operating theater), their shadows become larger, creating impressive and creepy images.