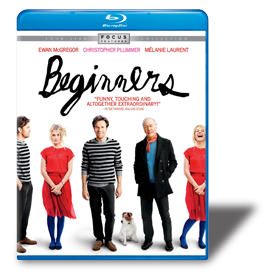 Beginners was one of the best films of 2010, but it received rather haphazard theatrical distribution. It didn't play in my local multiplex, and unless you live in a metropolitan area you probably didn't get to see it in a theatre. The plot is simple: Oliver, a late-30s graphic artist (Ewan McGregor) meets Anna (Mélanie Laurent) at a party and begins a relationship — one that, based on his past, is doomed to fail. Oliver's father, Hal (Christopher Plummer), has passed away just months before. Hal had come out as a gay man at age 75 and embraced a full and active life with new definitions and parameters. Oliver draws strength from remembering his father's bravery in being a "beginner" to bolster his own newness at a serious relationship.

The basics can't begin to describe the charm of this little film. It has a most unusual structure, using flashbacks and narrated time capsules. In these, Oliver tells the audience what was going on during a certain year while the screen displays a slide show of still images. These sections mesh with the film's overall style and never seem intrusive. Though time jumps back and forth, the editing is so skillful that there's absolutely no confusion. And despite dealing with death, the overall film is quite upbeat and amusing.

McGregor and Plummer deliver Oscar-worthy performances that are subtle and moving. The highest points of the movie are their scenes together, which just barely sidestep sentimentality to seem very realistic. In the spirit of beginnings, Plummer, in his later years, has suddenly emerged as one of the great actors of this age.

The Blu-ray of the movie is excellent. Presented mostly in muted colors, the picture doesn't always pop, but it's clean, well defined, and certainly as good as most average contemporary films. Likewise, the soundtrack isn't spectacular but it's always reliable. Whispering characters are easily heard, and the music fares well, too. The extras are skimpy, consisting only of a director's commentary from Mike Mills and a short production featurette. I would suggest a Criterion edition down the road so that this fine film can offer the extras it merits.

Be sure to watch for: There are a lot of long hallway and street shots in the movie, and they have good depth thanks to Blu-ray's high definition. One at the beginning of chapter 10 shows Oliver and his dog walking down an outside hallway. The definition holds steady as they get farther away.