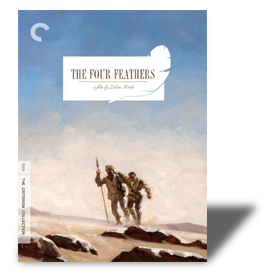 A.E.W. Mason's adventure novel had been filmed many times before Alexander Korda produced his 1939 Technicolor version with his brother Zoltan directing. It's arguably the best rendering of the story, though according to Charles Drazin's commentary on this disc, it strays furthest from the original. It strays from its letter, I think, but not its spirit. And that spirit is British to the core. This film passes no judgment on the oft-criticized British Empire of the late 1800s; instead, it praises the valor of British soldiers fighting in the Sudan. Honor is all, even if it defies common sense, and cowardice is a crime seemingly second only to murder.

Cowardice and redemption are the themes treated well in this large-scale movie. On the night before his regiment is to leave England for the Sudan, Harry Faversham (John Clements), who comes from a long line of military leaders, resigns his commission. His fellow soldiers declare him a coward and send him three feathers, a sign of cowardice, to which Harry adds a fourth, representing his fiancée Ethne Burroughs (June Duprez). After some soul searching, Harry decides to enter the Sudan, disguised as a Sangali tribe member, complete with a branded forehead. He rescues his friend, Captain John Durrance (Ralph Richardson), who is blind from the desert sun, and in so doing rids himself of one feather. Richardson's portrayal of a newly blinded officer displays the honor-before-common-sense idea. Though he cannot see, he won't admit it, and he uses ruses and bull-headed stoicism in a futile attempt to fool the men under his command.

The battle scenes in this movie are considered classic, and I will surely agree to that. How thrilling it is to see an army of a few thousand extras battling without CGI enhancement. I don't think I've ever seen so many camels in one place or have known how fast they can gallop. The desert is distressingly drab in direct contrast to the opulent drawing rooms and green fields of England. Criterion's transfer is not perfect (though I really think it's an issue with the print they used); there's a problem in the first part of the movie that makes white-wing collars appear to be edged in red, and some scenes aren't as sharp as others, but most of the film is displayed in the gorgeous Technicolor of the early days when filmmakers seemed to be trying to cram the whole palette of a rainbow into one scene.

The sound is serviceable. Dialogue is crisp and clean, sound effects are effective, and Miklós Rózsa's score for the film is one of his best. It sounds sufficient here, but you can imagine what it might sound like in a state-of-the-art digital recording. The extras are skimpy for a Criterion release. As mentioned, there's a good, if slightly irritating, film commentary by film historian Charles Drazin. Sometimes he's screen-specific in his comments; at other times he isn't, so the scene you might want to know something about could be ignored. In addition to the commentary, there's a recent, energetic interview with David Korda, son of director Zoltan Korda, as well as a curious little featurette made in 1939 that amounts to a tour of the London Films operation run by the three Korda brothers (Alexander, Zoltan, and Vincent). There's also a trailer.

Dealing in the attitudes and actions of the late 1800s, The Four Feathers vividly depicts that era and gives us a very pro-British look at the military of the day. You can study that, or take it as a simply smashing good adventure story, one that holds up remarkably well today.

Be sure to watch for: There are some genuine spectacular Technicolor exteriors, such as the garden and mansion house at the beginning of chapter 12. What impressed me as much were some of the photos and poster shots used in the David Korda interview. Many of them are aged and scratched, but some are breathtaking in their detail. They're among the best still frames I've seen on any Blu-ray.