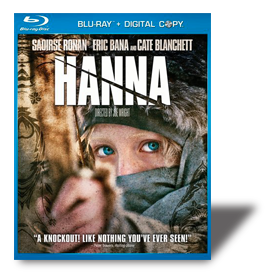 Joe Wright has directed three hits: Pride and Prejudice, Atonement, and now after a semi slip from grace with The Soloist (a film I liked better than most critics), the remarkable Hanna. This latest success brands Wright as a director to watch and follow; he’s young and he no doubt has a lot of important films left in him. His next is to be Tolstoy’s Anna Karenina, and I’ll certainly catch it as soon as it hits my local multiplex. Wright’s films are both entertaining and boundary pushing. They're visual enough to keep me glued to the screen, but they extend far beneath the surface gloss. He's also able to encourage dynamic performances from his actors; you sense that they're giving their all -- and then some.

Then there's the camera work. Many directors use Steadicam, dolly shots, tracking shots, and other techniques, often at jarring places in the film, and they can become bothersome and take away from the drama. Wright uses many daring creative shots (such as the long tracking shot on the Beach of Normandy in Atonement), but they always heighten the action. There's a sequence in Hanna where the heroine is having an intimate conversation with another young girl after they've both been out on the town, and there are moments when the close-ups are so close that we see only an actor's single eye. The trick is to establish the normal distances and cut back to them to keep us rooted in a sort of cinematic reality. It all flows without a hitch and heightens the intimacy of the scene without ever seeming abnormal. What a gift! Wright also admits to a fascination with circles in this movie, not just as visual anchors but also as plot devices. Hanna's opening and closing lines are the same.

Critics lauded the performances in this film when it was first out in theaters. I can only echo those praises. Saoirse Ronan is amazing as Hanna, a teenage girl raised by her father in the wild country of Finland to be an assassin. Eric Bana plays her father, a former CIA agent, ruggedly but with feeling. The villain in the story is Cate Blanchett, an agent trying to tie up loose ends of a failed experiment by killing the father and daughter. Wright says that in a way this film is a modern fairytale: Ronan is Little Red Riding Hood / Snow White, while Bana is the kind but gruff woodsman, and Blanchett is the wicked witch. It works for me, especially since the last part of the movie takes place in an abandoned amusement park where the central building is a gingerbread cookie cottage.

The Blu-ray is a good demonstration disc to have around. It covers just about any type of scene you can imagine, starting in a virtual snow wipeout in Finland (look for the seemingly tangible snow on the branches of the trees), and throughout Europe with pristine city shots, warmer gypsy campfire shots, and the creepy sight of destroyed dinosaurs in the amusement park. The Chemical Brothers (Tom Rowlands and Ed Simons) wrote the score, and their electronic music is carefully integrated with the sound effects. The approach is so smooth that it becomes difficult at times to say what is music and what is effect. The music and effects are spread completely around the 360-degree soundstage in tracks that are singularly transparent.

Wright provides a commentary track that's useful and humble. There's also an alternate ending (boo to that -- they did right to toss it out) and a few deleted scenes, as well as a handful of production featurettes dealing with different aspects of the movie. Hanna is a thrill ride with tremendous substance. You'll enjoy all of the pulse-pounding action, but later you'll reflect on the father-daughter tale of a teenager's transition to adulthood. You'd be wrong to miss it.

Be sure to watch for: I mentioned the camera work of Joe Wright, who uses Steadicam for a big fight sequence in an underground parking lot. The scene is carefully choreographed to keep the main fighter framed throughout the swirling motion, and the result is both impressive and exciting.