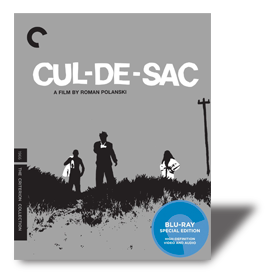 Having given us a remarkable Blu-ray edition of Roman Polanski's Repulsion, Criterion has now set its sights on the director's second film made in London. As with Polanski's two other British films, Polanski and Gérard Brach scripted Cul-de-sac. It's one of the oddest movies ever made, one that no one has tried to imitate. Who could? The quirky film is pure Polanski, and it's made with such skill that it seems like pure cinema. Polanski's shots are never fussy, yet they're always perfect. When deciding where to shoot and how to frame a scene, the Polish-born director always makes the right choice.

The plot of Cul-de-sac sounds like that of a thriller. Richard (Lionel Stander), a gangster on the run, and his dying partner, Albie (Jack MacGowran), come across a castle on a bleak and unfriendly island off the coast of Northumbria. There's a road to and from when the tide is low, but it's submerged when the tide returns. Living in the castle are George (Donald Pleasence), a retired businessman, and his wife, Teresa (Françoise Dorléac), a much younger French woman whom George lets dress him in drag. You'd think this would be a setup for the perfect thriller, and part of the film is just that. But Polanski veers off track into perhaps the darkest black comedy ever filmed. For one thing, there are all the chickens. They live in a garage that's been turned into a henhouse, but they wander everywhere. I'd say they show up randomly in at least 45 percent of the movie. No wonder Pleasence plays George as an eccentric waiting to go over the edge. Stander's gravelly voice and tough-guy actions offer a caricature of the typical mob killer, while MacGowran makes dying an amusing event, in a black-comedy way.

Polanski shot the movie in black and white, and the Blu-ray transfer is offered at the correct 1.66:1 aspect ratio. The bright scenes come off with ideal contrast and admirable sharpness, but the indoor scenes are very dark and often a little murky. The transfer is still good; it's just not quite up to Criterion's usual standards. This was no doubt due, in part, to the condition of the original film. The sound is perfectly serviceable for both the dialogue and Krzysztof Komeda's stark jazz score. Cul-de-sac doesn't have constant music, but it arrives at perfectly chosen places in the drama. You can tell Criterion has cleaned it up a lot to get rid of background noise, and it does the job. There's not a lot on the soundtrack that would need more modern sound.

The extras are lean for a Criterion title, but they include two original trailers, a 1967 television interview with Polanski, and a 2003 documentary about the filming of the movie that details the horrible working conditions and the problems among the actors on set. Cul-de-sac is a remarkable little film that will entertain you a lot if you just surrender and go with it. Criterion has done a good job on its transfer to Blu-ray Disc, but has skimped on extras.

Be sure to watch for: Needing a place to hide his getaway car, Richard orders all the chicken coops removed from the garage so he can stow his vehicle. The scene, shot from the back, shows all the coops being smashed in the foreground, and you can see out the door to the car's headlights, which light the scene, in the background. It's a shot that's weird and wonderful at the same time, and it's certainly memorable.