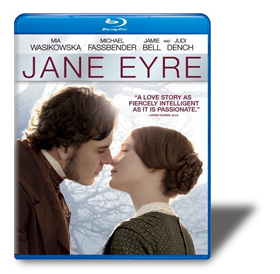 Jane Eyre, Charlotte Brontë’s brooding, groundbreaking novel, has shown up in so many film adaptations that you might be wondering whether another is needed. But after seeing this version on Blu-ray, you'll be grateful that young filmmaker Cary Joji Fukunaga set all doubts aside and steamed ahead with an interpretation that's bursting with the exuberance of youth.

The basic plot, lest you've forgotten your high school literature class, follows an orphan who's reared in a cruel finishing school, which she leaves to become a governess. She falls in love, but the revelation of a shocking family secret drives her away. She then happens on a position as a schoolteacher, but she can't forget her time as a governess, nor the man who betrayed her trust.

In the novel, Jane Eyre is just 18 when she becomes governess to the ward of Edward Fairfax Rochester, and the actress who portrays her, Mia Wasikowska, was only 21 during filming. Rochester is described as somewhat older, so the casting of 34-year-old Michael Fassbender proves ideal. The two share a chemistry that perfectly conveys the restrained and repressed sexual energy of the 18th century, and their scenes together forge a passionate course for the film. To let us know that his adaptation will be more than PBS posturing, Fukunaga tells the story from the middle, as Jane is crossing the inhospitable moor to escape her duplicitous lover.

Wasikowska is a remarkable actress in the way that she internalizes her feelings. Her face can be as waxen as that of a TV news anchor, yet something in her eyes, or perhaps just the faintest curl of her lips, betrays deep emotion. She's much better as Eyre than as Alice in Tim Burton's Alice in Wonderland, where she seemed detached and cold. Fassbender is the solid stud that he was in Fish Tank and Inglourious Basterds. He has an animal-like magnetism that perfectly suits characters who are gentlemen at heart but careless and impetuous in the moment. Rascals, you might call them. Dame Judi Dench is on hand as Mrs. Fairfax, the housekeeper of Thornfield Hall. We get the feeling that she knows absolutely everything yet delivers her information without interpretation. It's a small yet important role that Dench handles perfectly.

Movies like Jane Eyre, with sweeping vistas of the countryside and detailed interiors and costumes, seem ideal for HD reproduction. This one has many dark interior shots using available light, and the exteriors are brown scenes of late winter vegetation mixed with the more usual green shots of spring and summer that we expect in a film of this genre. The ornate costumes, tapestries, and carpets look lived in thanks to Blu-ray's meticulous detail. The sound is mostly up front for clear dialogue, though in some scenes the music and ambient sound effects come from the sides and rear.

The extras are rather pale. There's a large group of deleted scenes that are reasonably interesting -- I'd suggest two of them should have made the final cut -- but they're presented with no commentary or explanation. There's also an earnest but surprisingly boring commentary from director Fukunaga and three pitifully short, dispensable production featurettes.

Jane Eyre is an epic love story that the young Fukunaga has made into a most appealing and assertive film. It deserves to be seen. If you missed it in the theater, the Blu-ray Disc fills in the gap very well.

Be sure to watch for: There are many gorgeous interiors in this movie, particularly the one that begins chapter 10. It might be a music room, shot from above and lighted through a large window. The foreground shows a chandelier, and as the camera moves we can see in the room a harpsichord, a small table perhaps used for games, and a long table that could host a banquet, all in excellent detail.