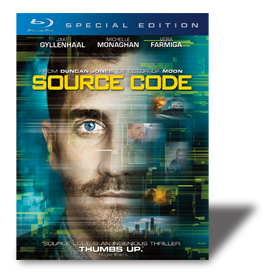 This is the second feature film from director Duncan Jones. His first, Moon, was a brilliant sci-fi flick that too few people saw. Grouping Moon and Source Code together, you'll be tempted to embrace Jones as a new master of intelligent cinematic science fiction. Fantasy and sci-fi are his apparent strengths, and he seems equally interested in focusing his films primarily on the main player, keeping him in the spotlight for 98 percent of the story. In Moon it was Sam Rockwell; in Source Code it's Jake Gyllenhaal.

Gyllenhaal has done some splendid work, particularly in Brothers and Brokeback Mountain. But aside from an Oscar nomination for his role in Brokeback, he's received less critical recognition than his co-stars in those films. In Source Code Gyllenhaal has finally developed into leading-man material. He carries the film, and all of the other characters, good as they might be, are supplemental. When he meets Christina (Michelle Monaghan) on a train, you remember him falling in love with her, not the other way around. Gyllenhaal's acting in Source Code has more edge than anything he's done. His star rating should bring in large audiences, but his talent in this film will have you forgiving and forgetting The Day After Tomorrow and Prince of Persia: The Sands of Time.

Reviewing this movie without spoiling the plot is a difficult task, but let's just say that Gyllenhaal's character, a serviceman named Colter Stevens, suddenly finds himself on a speeding passenger train that explodes eight minutes later, killing everyone. Scientists have developed a chamber, the source code, where they can recapture the last eight minutes of a person's life. They keep sending Stevens back so he can find the bomber, as their information warns that the train explosion is simply a warm-up for a dirty bomb in downtown Chicago.

Plot details aside, the film's suspense stems from the fact that the audience's learning curve matches that of Stevens. When we're surprised by a twist, he's just as shocked. The concept makes for neat filmmaking, but I think the ending will be a little controversial. All I'll say is that Jones shouldn't have, but I'm happy as all heck that he did.

The picture is reference material most of the time. The stubble that covers Gyllenhaal’s jaw, the lines etched in faces, and the woven texture of clothing are all revealed in the highest definition. Blacks are dark and shadow detail is fine. The sound is exceptionally rousing but not without good definition and transparency. The surrounds, of course, play a big part in the train explosion that we see so many times, but they're also used for smaller location sounds. Every time Gyllenhaal gets sucked into the source code, there's an effective "swooshing" noise that draws us in too.

The extras are a mixed bag -- not bad but hardly exhaustive. There's a commentary track with Jones, Gyllenhaal, and writer Ben Ripley that's modestly entertaining, and there's something like Universal's U-Control feature in "Access Source Code," which lets you see background material, cast comments, and trivia while watching the movie.

Be sure to watch for: Since so much of the story involves the train, there are lots of very high overhead shots as we watch it wind its way through the countryside. These scenes are postcard-like wow events that make you grateful for your HDTV, especially if it's 60" or larger.