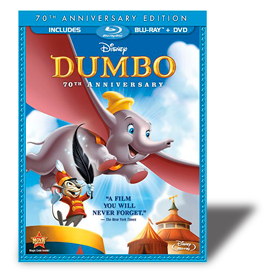 One of Disney's Favorites on Blu-ray Disc

Walt Disney's Dumbo is as close to a perfect film as I ever expect to see. It has clear and impressive storytelling; likable, well-developed characters; humor; brilliant animation; appealing music with imaginative lyrics; and a simple message that's played just right. As if that's not enough, it has Casey Jr., the locomotive with the greatest personality in the history of animated railroading, and "Pink Elephants on Parade," which is, no contest, the most impressive and imaginative surrealist animated segment ever made. Dumbo was Disney's favorite film, and according to one of the shorts in the extras section, it was Leonard Maltin's, too.

Disney's first animated feature, Snow White and the Seven Dwarfs, made good money and put the Disney studio on the map. But Pinocchio (which shares top honors with Dumbo on my personal Disney rating list) and Fantasia weren't huge financial successes, and going into 1941 Disney's operation was facing serious money troubles. Dumbo became the breakthrough that would pull the studio out of the financial abyss.

Dumbo remains Disney's most emotional film. The little elephant (who never speaks, by the way) is bullied because of his big ears. His mother stands up for him and is jailed in a trailer with bars on the windows and a sign warning everyone that she's a "Mad Elephant." Enter Timothy Q. Mouse (voiced by Edward Brophy), dressed in a bright red and gold circus uniform, who doesn't see anything wrong with Dumbo and becomes his champion. By the end of this short film, Dumbo finds that he can fly, and he soars over all of the bullies who once tormented him.

As usual, Disney has brushed up this movie so that it looks like they made it yesterday, not 70 years ago. The colors are bright and bold, and the detail is as good as one could hope. The original mono soundtrack has been mixed into DTS-HD Master Audio 7.0, with a restored original soundtrack in 2.0 mono for purists. I'm always amazed at how Disney can take tinny, mono optical elements and create a natural-sounding soundtrack. The goal in using all the channels isn't directionality (you're aware of the surrounds in only one or two instances); rather, it's to open up the audio so that it doesn't sound thin, flat, or lacking in presence. It works.

The extras contain one of my favorite featurettes: a short on the sound effects for Dumbo in which Robert Benchley wanders into the sound-effects studio and observes a dry-run rehearsal for the Casey Jr. sequence. The whole number is played with shots from the movie alternating with fascinating shots of the effects being created. There are two other production featurettes and an extensive section of still shots. The stills are sharp and clear, produced with greater care than most photo galleries, and they cover all aspects of production, including the research photos taken when Disney animators observed real elephants and other circus scenes to more accurately draw them.

The case includes a DVD in case you don't have a Blu-ray player yet, but this little movie shows its full splendor only in the HD presentation. Whether you've seen it before or not, the eye-popping Blu-ray should be welcome.

Be sure to watch for: Chapter 13, "Pink Elephants on Parade." This is the most imaginative animated sequence ever made, with supernatural elephants morphing into ice-skating elephants and a belly dancer who morphs into a cobra. Then there are the striped and plaid elephants, which are constantly morphing and changing. All of this mirthful and mock-sinister mayhem is played against an inky, solid black background.