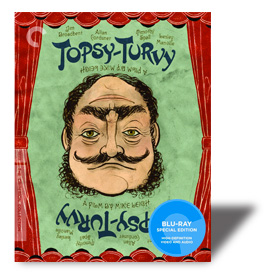 William S. Gilbert and Sir Arthur Sullivan were 19th-century creators of exacting, magnificent musical trivia, and the pair became so famous that even while they were alive they were known simply as Gilbert and Sullivan. Moving forward a century we find Mike Leigh, a director known for his gritty, uncompromising, and extemporized film portraits of everyday Brits under stress, as evidenced in Secrets and Lies, Life Is Sweet, and most recently, Another Year. Leigh tackling a biography of Gilbert and Sullivan might seem unusual, but a glimpse into Leigh's background reveals another side to his artistic ambitions that follows from his extensive career in the theater. It’s obviously in his blood, and Topsy-Turvy, in addition to being a most entertaining period biography, is a seminal tribute to stage production.

This 1999 film is a dazzling, meticulous dissection of the creative process through which Gilbert and Sullivan create The Mikado, one their most beloved works. We're shown how Gilbert got the idea when his wife dragged him to a Japanese exposition and how the show was written, rehearsed, and produced, right down to scenes involving the costumes and cast salaries. Then we're given the triumphant opening night and, to complete the process, the feelings of the cast and crew after the curtain comes down. Leigh focuses on the familiar "Three Little Maids from School" sequence as an example of artistic evolution. We see it from rehearsal (where Gilbert brings in some actual Japanese women to give advice) to the finished production, allowing us to appreciate what went into achieving the desired result.

The Mikado takes up the second half of the movie. During the first, Leigh introduces the characters and sets up a conflict between Gilbert and Sullivan, with Sullivan deciding he's tired of writing theater music and wants to write great operas and symphonies. But Gilbert’s plot idea for The Mikado entices Sullivan back into the partnership. Throughout the film, Jim Broadbent and Allan Corduner are thoroughly convincing as Gilbert and Sullivan, and the rest of the players are impeccably cast.

You don't have to be a Gilbert and Sullivan fan to fully enjoy this appealing story, but the more you know, the more you'll enjoy it. And for newcomers, Mike Leigh's commentary explains most of the subtleties, such as the fact that a small portrait of the real Gilbert is sitting on a table in the center of the frame as Gilbert and his wife talk on either side of it. The Blu-ray is sharp enough that an astute viewer can identify the portrait, and all the details of Victorian décor are reproduced with exemplary clarity in colors ranging from the austere tones of Gilbert's home to the vibrant colors featured in the stage excerpts.

The sound is excellent, with the all-important music receiving a much-better-than-usual treatment. The pit orchestra serves as source music in many scenes where there's extremely good stereo separation, with the winds on the left and strings on the right -- the reverse of what we usually experience today. Carl Davis has masterfully adapted various Gilbert and Sullivan works to fashion the remainder of the musical score, which is recorded with refreshing clarity.

In addition to the Leigh commentary, extras include an excellent and enlightening discussion between Leigh and musical director Gary Yershon, Leigh's 1992 short film A Sense of History, four deleted scenes, a 1999 featurette, the theatrical trailer, and TV spots. Also worth noting is the Criterion cover, an example of an art form called joge-e, in which an image takes on a different meaning when turned upside down. The cover, created by Yuko Shimizu, depicts the more serious Gilbert and the more hedonistic Sullivan. It's all in how you look at it.

Be sure to watch for: At the beginning of chapter 5 we see Sullivan and his mistress at the piano. They're mid distance from us, with part of an ornate sofa in the foreground and a decorated vase behind them at the window. Thanks to the definition of Blu-ray, everything is crisp and clean, giving the scene a wonderful sense of depth.