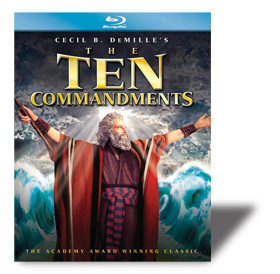 Paramount Adds a Demonstration-Caliber Disc to the Blu-ray Bookshelf

Those looking for a Blu-ray title to test and show off their home-theater systems have had to settle for Pixar animated features, each of them gorgeous, or Avatar. There have been no live-action, color films that could equal those choices. But we now have Cecil B. DeMille's 1956 version of The Ten Commandments, which Paramount Studios has thoroughly restored to provide a breathtaking picture worthy of the biggest screen you can throw at it. The colors are vibrant, and the detail fastidious. There's no flicker, edge enhancement, rip, pin hole, or tear in the master. It's nearly perfect, in no way looking its age. And since the film was made using VistaVision, it can be presented in a 1.78:1 aspect ratio that will fill the whole HDTV screen.

Though not quite as impressive as the picture, the sound is still better than average. Elmer Bernstein's lofty music score has a good frequency range, and there's actually a lot of bass, which isn't typical of other films of the period. The sound effects have bass, too. The chariots that chase the Israelites across the desert will test your subwoofer, as will a few other scenes. The voices Moses hears during his solitary vigil in the desert are skillfully panned around the room, and the parting of the Red Sea offers arresting sights and sounds, as the video and audio are perfectly balanced to provide thrilling entertainment.

The movie is deliberate and pageant-like in its delivery. Regardless of whether you consider it gospel, the narrative of Moses being reared in the royal Egyptian household and finding out he's really a Hebrew before leading his people out of bondage is interesting and absorbing. Charlton Heston (Moses) and Yul Brynner (Rameses) were at the top of their game when they made this film. Their scenes together crackle with excitement and tension as the two actors flex their magnificent voices and muscles to make their points. Anne Baxter might be a little over the top as voluptuous Nefretiri, but Edward G. Robinson rings surprisingly true as the lascivious Dathan.

This two-disc set presents the movie in two parts, one per disc, with the same intermission break from the original roadshow presentations. The overture, entr’acte, and exit music are all intact. Other than trailers and newsreels, there’s only one substantial extra, but it’s a superb one -- an enthusiastic and informative commentary by Katherine Orrison, author of Written in Stone: Making Cecil B. DeMille’s Epic The Ten Commandments. Orrison has devoted a large portion of her life to researching and chronicling the movie, and she discusses with authority the production and actors, as well as the film's authenticity and proximity to ancient Egyptian culture.

Paramount is also releasing a deluxe, boxed, multidisc "limited edition gift set" version of the film that includes DeMille's first version from 1923, more extras, and replicas of the tablets on which the commandments were written. This two-disc version will be grand enough for most viewers, and it gives owners of home-theater systems a tremendous reward in showing off their video-audio systems to the max.

Be sure to watch for: The numerous panoramas of breathtaking Egyptian exteriors cannot be missed. The scene that made me grateful to have tweaked my home theater using the Digital Video Essentials disc occurs at the end of chapter 27, which depicts the death of the pharaoh Seti I (Sir Cedric Hardwicke). The colors are rich and dark, while the shadow detail is exemplary. It’s a dark scene that will be neither murky nor overly bright if you've adjusted your system properly.