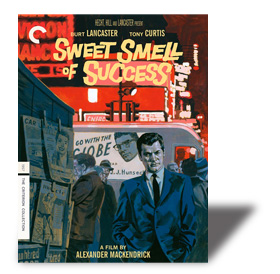 Clifford Odets and Ernest Lehman scripted this dark 1957 masterpiece, whose principal character they based on Walter Winchell, the controversial gossip columnist. In the movie he becomes J.J. Hunsecker, played by a bespectacled Burt Lancaster. Hunsecker is a ruthless gossip-column writer who can make or break fortunes, keeping, like Winchell, a DDL (drop-dead list) of those who are permanently banished from his presence. He holds court in a restaurant where he has a special table, complete with private telephone. Lancaster, who usually played a hero, shows his acting versatility by perfectly capturing Hunsecker's vicious arrogance.

Tony Curtis plays Sidney Falco, an unprincipled, smarmy little man who works as a press agent while wanting to be a successful columnist like Hunsecker. He manipulates people, facts, and innuendo to try to get in Hunsecker's good graces, but all he achieves is public humiliation. It was a risk for Curtis to take such a role, as his previous good-guy parts had secured a large following of teenage girls. But the risk paid off, with Curtis showing that he had real acting chops.

The plot gets rolling when Hunsecker wants Falco to break up his sister's relationship with a jazz-guitar player (Martin Milner, playing in the film with the real-life Chico Hamilton Quintet). The rest of the film is cross and double cross, as Falco weasels his way into precarious situations and Hunsecker demonstrates his ruthlessness. The action is very fast, and I was struck by the crisp pacing of director Alexander Mackendrick, who never wastes a second. The dialogue is as priceless as it is merciless. Hunsecker's line after Falco offers a particularly unpleasant suggestion is my favorite: "I'd hate to take a bite out of you. You're a cookie full of arsenic."

Academy Award-winning cinematographer James Wong Howe lit the film in a realistic way that he discusses in one of the supplements. It looks as good as any of the other black-and-white masterpieces from Criterion, meaning it's excellent and at times breathtaking. Blacks are jet black, whites are bright, and there seems to be over 100 shades of gray in between. The focus is sharp and clean, with good shadow detail. Both the dialogue and Elmer Bernstein's jazzy music score come across clearly on an excellent uncompressed monaural soundtrack.

In addition to the piece on James Wong Howe and his interesting discussion of lighting, there's an extra devoted to the films of director Alexander Mackendrick, another in which filmmaker James Mangold talks about Mackendrick as an instructor and mentor, and still another that finds film critic Neal Gabler discussing Walter Winchell. The extensive booklet contains an enthusiastic if not always clear essay by critic Gary Giddins and two short stories by Ernest Lehmann that use Hunsecker and Falco as characters.

Be sure to watch for: The opening scene on the streets of New York, as the first edition of the Globe newspaper is being delivered, sets a bustling tempo and crisp visual style that lets you know you're in for something special.