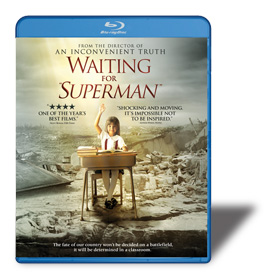 Documentaries used to be painful to watch, not just because their content might often hit on an issue close to home, but because their picture quality was more like that of 16mm home movies than a feature film. That has changed, as evidenced in this feature film, Waiting for Superman, with its bright, colorful, and well-focused images. Only when the director occasionally, deliberately dips into the past, as in utilizing excerpts from the George Reeves Superman episodes, do we see anything of lesser quality than your average contemporary first-run romantic comedy. That it was passed over by the Academy Award nominating process this year is a mystery.

The idea here, from director Davis Guggenheim, who brought us the Academy Award-winning An Inconvenient Truth, is that our education system is broken, and though there are innovators who have found the answers to creating new and viable systems that would put the United States back near the top, old-style school unions have formed an almost impenetrable block to progress.

Guggenheim has structured his enlightening movie by focusing on five different students of different ages, from different cultural backgrounds. What they have in common is that they are underprivileged and must attend public schools in bad school districts. The film maintains that these institutions are merely failure factories and the facts back up an astonishingly large drop-out rate. The director then focuses on tenure issues, supported by the teachers' unions, which make it next to impossible to get rid of bad teachers and replace them with good ones.

Charter schools offer some hope. Guggenheim explores the success of the Harlem Success Academy, founded by Geoffrey Canada, KIPP LA Prep, and SEED in Washington, DC, an experimental boarding school. Students who manage to get into these schools thrive and almost all go on to college. But their enrollment is limited and filled by public lottery. It is painful to watch the lives of our five focus students end up as a game of chance. It’s more painful to realize that they are merely representative of hundreds relegated to failure in the name of education.

As mentioned above, the Blu-ray picture is excellent. So is the sound, though most of it is in the front channels. Still, the tracks do a handsome job of reproducing John Legend’s "Shine," an end-credit song written specifically for this movie. The extras include four success stories that didn’t make the final cut, as well as "The Making of Shine," the story of how John Legend came to write the song, and what education means to him.

The release includes a gift card from DonorsChoose.org. Go to their website and you can redeem the card for $25 worth of materials to be sent to the classroom you choose to support. It might seem a small effort, but Guggenheim pulls no punches in stating who can solve this crucial problem: you. We can’t wait for Superman to solve this dilemma. He never will. The DonorsChoose.org gift may not seem like much, but it’s a start.

Be sure to watch for: The third deleted sequence is about educator Bill Strickland and his efforts to present something better than the usual public school to the students of Pittsburgh. The differences between what has become the norm and what could be are dramatic.