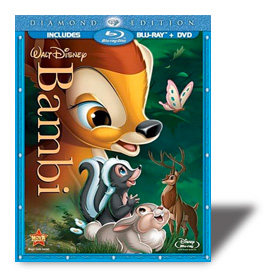 Never mind that they eat crops (all of my hostas in the summertime), and cause vehicle accidents that cost insurance companies millions of dollars, as well as many lives. We all have a love/hate relationship with deer, for in spite of their faults, they are still the sweet and cuddly animals we remember from our youth. I can’t speak for the last two or so generations, but my positive childhood opinion of deer (and perhaps other animals) was clinched by seeing Walt Disney’s Bambi. In it, the animals are all gentle and peaceful (wolves, bears, foxes, and mountain lions are completely absent from Disney’s woodland; the only predators are men), and we feel like they are friends. It seems entirely natural that they talk to each other and we grow quite attached to them, so that the tension and fear are great when they are threatened by man (or a forest fire caused by man).

Disney was very careful about voice casting and how the animals of the forest were presented, insisting that they must be like real animals and not like humans in animal suits. This is one of the ideas thrown out in the story meetings that were held regularly during production. In one of the most fascinating extras included in this two-disc set (Blu-ray plus DVD), recreations of these sessions are presented in a full-length picture-in-picture commentary simply called "Inside Walt’s Story Meetings -- Enhanced Edition." There you will find all sorts of information about the creation and fulfillment of the images found in Bambi. You’ll also be given the opportunity to press Enter and be taken to another extra or an applicable animated short, and then returned to the main feature without missing a frame.

There are many other extras, many of them from the previous DVD release. One of these is the complete animated short, The Old Mill, which is unfortunately presented in SD, where it looks little like the masterpiece it is. There are deleted scenes, and then there’s a new feature called "Disney Second Screen." Presumably you will be able to use this after the March 1 release date; I couldn’t activate it when I was writing this. The gist is this: you download an app to your iPhone or iPad and then you can synchronize it with the movie on your Blu-play player and watch the movie and the extra screen together. Sounds a bit like picture-in-picture to me and possibly more a good stunt than anything really useful. Or it might turn out to be totally cool. I’ll try to find out when it is available.

In Bambi, Disney has once again created an astonishing video experience for today using 60-year-old material. As in Fantasia, one can’t help but marvel that such fluid animation was achieved entirely without the use of computers. Bambi broke ground in having backgrounds that were watercolor and impressionist, and the Blu-ray reveals some brush strokes in these, while crisply rendering the sharply outlined characters in the foreground. The sound has been refurbished to 7.1, which seems like overkill in print, but the proof is in the listening, and there it works very well. There’s not much surround, though a commanding thunderclap is made startling by coming from directly behind the listener. But the tracks for this movie were optical and monaural and the sound is largely kept up front, where it has good focus and an appealing glow.

Bambi is a timeless story, one of the five early, pioneering, animated features by Disney that changed the history of the genre (the others: Snow White, Fantasia, Pinocchio, and Dumbo) and it has been given a fine transfer to the Blu-ray format that makes it viable not only as a historical gem, but as present-day entertainment.

Be sure to watch for: Disney was the first studio to really get the look of water right and chapter 7, "Little April Showers," is a showcase for water droplets. Each seems to have its own personality and looks exactly right, again wonders of hand-drawn animation.