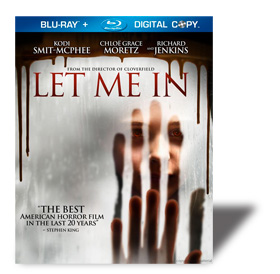 Think of this film not so much as a remake of the Swedish Let the Right One In, but as another version of the creepy novel by Swedish author John Ajvide Lindqvist. To the credit of American director Matt Reeves, he has managed to transplant the story to Los Alamos without sacrificing much of its magic. Though he stayed devoted to the original plot, he added a few sequences that help tell the story.

The tale is of two misfits who find solace of a sort in each other’s company. Owen (Kodi Smit-McPhee) is a small, thin kid who constantly has to fight off bullies at his school. At home he receives scant attention from his boozy mom, who is in the process of divorcing his dad. Abby (Chloë Grace Moretz) has just moved in next door. She's a vampire in the guise of a little girl, who must have blood to live. She's accompanied by an older man (Richard Jenkins) referred to as the father, though he’s actually her familiar -- a human who procures blood for her from victims who he targets at random from the local community.

Owen and Abby find common ground in their loneliness, and they form a bond indicating that Owen will replace the father as her companion, until he too gets older and is no longer of use to the ageless girl. The story is a peculiar coming-of-age tale in which only one of the characters can make the full transition. The cast is convincing in telling the story, with Moretz a fascinating wonder as the conflicted (or is she?) Abby.

Reeves provides more gore than we see in the original, but he manages to make it work for the story, like adding bitter angst to heartfelt longing. Most of the overt horror is relegated to the background of a shot, with just the right number of intermittent close-ups. Though there's less restraint, this technique seems borrowed from the Swedish movie. The foreign film, which I still find the better of the two, is a model of clarity and precision, whereas the American version is willing to taint the clearness of vision with a cloud or two. A lot of the blurring is done through the use of Michael Giacchino’s music, which seems heavy-handed and obtrusive on more than one occasion.

The Blu-ray is quite good. Most of its picture is clear and has good definition, though once in a while it seems to go soft. This effect is most likely deliberate and has little or nothing to do with the transfer to disc. The surround sound is subtle yet effective, and the dialogue is always clean and clear. Extras include a better-than-usual production featurette, while two shorter segments focus on special effects and an eye-popping car crash, which serves as a pivotal point in the plot. Reeves provides an entertaining and informative commentary, and there are trailers and a still-photo gallery, which includes poster art. The package contains a digital-copy disc as well as a comic book, which gives some back story on the film.

Both Let the Right One In and Let Me In have taken their place as instant horror classics. If you haven’t seen either, I would recommend the four-star Swedish version first, with the latter as a follow-up. By all means, see at least one of them to experience the poignant, realistic twist that author Lindqvist brings to the overworked vampire genre.

Be sure to watch for: In chapter 8, the father hides in a hapless student's car in order to strangle him while his friend is inside a convenience store. In the foreground we see the friend paying for gas, and through the window we see the struggle in the car. The audience knows the danger before most of the characters. This scene leads to the point-of-view auto crash, making the entire chapter a mesmerizing action-suspense sequence.