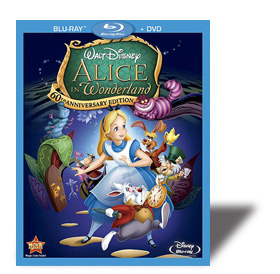 Disney’s Alice is Still a Wonder, and Better Than Ever on Blu-ray

I initially saw Walt Disney’s Alice in Wonderland during its first run in 1951. I was ten years old and spending the summer at Ocean Drive Beach, which had one movie theater. There were no multiplexes back then -- it was a one-screen, one-auditorium emporium. The house was filled with kids and not too many parents. In the middle of the movie a thunderstorm came up and knocked out the town’s power for a half hour. Though boisterous and talkative during the blackout, no one left. We’d all been so enchanted with what we had seen that we wanted more and were willing to wait.

Sixty years later, Alice has the same pull over me. Though I have favorite scenes, it is unthinkable to view them without seeing the rest. I love this film, and believe it has been unfairly judged throughout the years as "minor Disney" simply because it is "different Disney." There’s no romance, no princess, and instead of having one delightfully eccentric subordinate character, the film is totally populated by them. It also has more songs than any other Disney title. Kids loved it, but critics distanced themselves. Now, the kids have grown up to be critics so opinions are changing.

In Kathryn Beaumont, Disney found the ideal Alice. The Blu-ray contains a recently discovered live-action study sequence in which Alice has a discourse with a door knob. Pert, petulant, and precocious, Beaumont is never mean-spirited, just an inquisitive little girl who has opinions of her own. She’s ideal. The oddball characters she runs into are just as perfectly voice cast and drawn, including Verna Felton’s commanding Queen of Hearts, Bill Thompson’s harried White Rabbit, and Jerry Colonna’s insane March Hare, though Sterling Holloway’s sly Cheshire Cat is no doubt the most memorable. He was our favorite grin as kids, and remains mine as an adult.

The new Blu-ray release is outstanding. The first thing you’ll notice are the colors, which stand out as bright, deep, and varied. There’s a clue to this in the opening scene when we’re shown a traditional green and yellow countryside. Suddenly a pink and purple butterfly flits into the scene, to be accompanied by an azure mate. Throughout the movie, unexpected colors pop up, yet none of them is ever garish. Rather, they seem to suit. And the Blu-ray shows all of them in a picture than often borders on intense. The source material has been cleaned up so well that no flaws are visible and the Blu-ray sharpness makes many scenes seem three-dimensional.

The soundtrack is offered in a cleaned-up two-channel version of the original and in DTS-HD Master Audio guise. I preferred the latter, as the Disney engineers have done a marvelous job in giving the tracks more presence, depth, and range without doing anything that would be uncharacteristically startling. The disc defaults to the original tracks, so to obtain the DTS ones you will need to go into the setup menu.

The picture is presented in the original 1.33:1 aspect ratio, which, on HD sets, will cause black bars to appear on the left and right of the image to frame it in. For those who simply don’t get what aspect ratio is all about and want their whole screen filled all the time, the disc offers Disney View, where the black bars are replaced with wallpaper paintings that match the main image as closely as possible. Though these are not really all that bad, I opted for the original 1.33:1 as the black areas ideally set off the feature’s bright colors.

There are a multitude of extras, including almost all of the ones from the DVD release, which are unfortunately almost all still in SD. There is a new HD color introduction from the1959 television broadcast (the show was broadcast back then only in black-and-white), and a marvelous feature-length picture-in-picture, Through the Keyhole: A Companion’s Guide to Wonderland, which contains a lot of information about author Lewis Carroll and Disney’s production of his most famous story. The movie is included on a companion DVD for those who can’t play Blu-ray yet or want it to play the film in places other than the home theater, but I think that this Blu-ray is reason enough to invest in a new player if you don’t yet have one, especially since Walmart is now selling network-enabled Sony machines for under a hundred dollars.

Alice in Wonderland is an animated classic that should please children of all ages. The Blu-ray version is of demonstration caliber, offering a perfect picture and near-perfect sound. This is not one to rent, but to own, and Disney has made it quite affordable.

Be sure to watch for: There are so many astonishing scenes in this movie, it is hard to pick one, but I’ll go for chapter 25, "March of the Cards," in which two-dimensional playing cards are transformed into three-dimensional characters, in a pack that folds and unfolds and changes into psychedelic colors. To think that this complex scene was hand drawn without the assistance of computers is simply mindboggling.