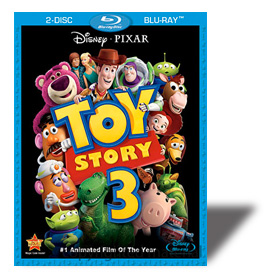 A Totally Satisfying Final Act to a Memorable Trilogy

Before Toy Story 3 was released, this past summer’s movies were looking like a series of misfires. But Toy Story 3 turned out to be a huge success and broke that pattern, scoring with critics and audiences alike. The Toy Story franchise now exists as a trilogy of uniform-quality films, where it’s impossible to add one or two to your collection; you simply have to purchase all three.

Admit it or not, we’ve all had favorite toys that were incredibly real to us. We played with them daily, putting them into scenarios we’d concoct from bits and pieces of culture that we were learning as we grew up. We trusted them with our deepest and darkest four-year-old secrets and elevated them to buddy or pal status. With me it was an old brown teddy bear that I loved so much I literally wore it out.

Pixar examines that child-toy relationship in this movie in a very palatable way, simply by showing us. Andy, the owner of all the toys in the first two parts of the story, has grown up and is going to college. He no longer plays with his toys, though he has a great fondness for them, especially the cowboy-sheriff Woody (voiced by Tom Hanks) and plastic spaceman Buzz Lightyear (Tim Allen). The toys end up getting donated to Sunnyside Daycare Center, where they get commandeered by Lotso (Ned Beatty), a very disgruntled and evil strawberry-scented teddy bear. Woody still believes that he and his pals belong to and with Andy, though the other toys think Andy has abandoned them. The answers to these issues make for a three-hanky ending that will move even the hardest heart.

Toy Story 3 arrives on home video in a four-disc combo pack consisting of two Blu-rays, a DVD, and a digital-copy disc. The video and audio transfers are beyond reproach. I’ve given five-star ratings to Pixar’s picture and sound, and they deserve it. I’ll go so far as to say that if you haven’t seen a Pixar film in Blu-ray on your home-theater system, you don’t know how good your equipment can be.

Textures are particularly good on this release. Items like the smoke from a locomotive or Lotso’s plush fur, which has obviously been through a lot, give the movie a sense of reality that helps make its fantasy elements thoroughly acceptable. The sound design is also perfect. Dialogue is always clear, and sound is dotted around the 360-degree soundfield in a realistic manner. Thunderous subwoofer action is reserved for the finale, making it all the more impressive when it happens.

There are dozens of extras that examine the making of the movie (and Day & Night, the included short that ran with it) as well as the general character of the Pixar company. If you haven’t seen this film yet, rest assured that this Blu-ray Disc is an eye-popping, heart-warming experience not to be missed!

Be sure to watch for: In chapter 23, Ken shows Barbie his closet full of outfits and then, at her insistence, models several. The individual textures, stitching, and color of each outfit are dazzling, just as they would be in reality. The colors really pop in this scene.