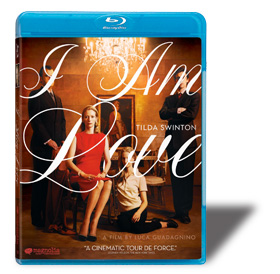 If you’re a film buff, you’ll only be about 10 minutes into I Am Love before you start to wonder if the ghost of Luchino Visconti has come back to earth to direct yet another cinematic masterpiece. That’s not to say that director Luca Guadagnino has made an entirely derivative movie, but past influences are predominant and the young director does mention Visconti in his rather lengthy interview in the extras section. Guadagnino makes his homage even more evident in naming one of his characters Tancredi, after the name of the nephew in Visconti’s seminal film, The Leopard.

That movie closes with a banquet; I Am Love opens with one, in which the camera virtually caresses the food, the accoutrements and the faces of the characters with whom we are to spend a few hours. The primary visage is Emma (Tilda Swinton), the head of the household, though brief scenes prior to the feast indicate that she acts more comfortably as a domestic. Later we learn that she’s Russian and that she married into a wealthy mercantile family in Milan, but she stands always apart, never fully joining the tight-knit family.

At the end of the dinner, a man arrives with a gift, a handmade cake for Edo, Emma’s son. The giver is Antonio (Edoardo Gabbriellini), a master chef and Edo’s friend. Emma takes notice, and she begins to fall head over heels in love. It doesn’t seem to be a fling for her; this is the passionate relationship she’s waited for her entire life. The movie is about her relationship with her family and her lover, but it’s also about the breakup of a wealthy merchant class, a manufacturing aristocracy. Here again, the association with The Leopard is unmistakable. At the end of both films the main character vanishes and moves on, leaving behind a life that is no longer tenable.

Swinton doesn’t just act her role, she embodies Emma in every movement and expression. This is surely an Oscar-worthy performance, though the only award she won for her remarkable achievement, which involved learning both Italian and Russian, was from the Dublin Film Critics. The rest of the cast seems perfectly suited to their roles, and they offer rich character development throughout the whole movie.

Exterior and interior shots provide a feast for the eye, and the Blu-ray Disc, for the most part, looks colorful and well defined. Some of the very darkest scenes are a little murky, however, making me wish for better shadow detail and contrast. The soundtrack does an excellent job of reproducing the bustling John Adams music score, and it’s about the only time the surrounds come into play. During dramatic moments, even when there’s a lot of activity, the sound stays up front, where it’s well balanced, clean, and clear.

The extras include a commentary by Guadagnino and Swinton, and there are quite a large number of lengthy interviews with the cast members, who shed quite a bit of light on their characters. I Am Love gives Tilda Swinton one of her best roles and immerses the eye with visions of natural and manmade beauty. Its romantic sweep dictates that it should be seen on the largest screen you can find. Be forewarned that the shots of food are so inviting that you might emerge from a viewing with quite an appetite.

Be sure to watch for: The opening sequences show Milan during a rare snowfall, which transforms it into a surreal winter wonderland, bringing out incredible detail in both manmade structures and nature’s tree limbs. These gossamer opening credits made me want to see the rest of the film.