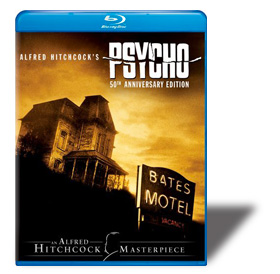 Psycho Looks, Sounds, and Scares Better Than Ever

Psycho broke the mold in so many ways that it has become often imitated but never surpassed. One of the interesting featurettes in the extras section has famous directors like Martin Scorsese and William Friedkin talking about Hitchcock’s influence on them, and there’s a separate featurette on François Truffaut and Hitchcock. The director’s name has even been absorbed into the English language as an adjective. If someone describes an event as Hitchcockian, we know exactly what they mean.

While other movies come and go, Hitchcock’s films remain viable and entertaining without seeming dated. Psycho is no exception. It still stirs the blood and stimulates the senses, and though some of the original suspense might be tempered by our knowing what’s going to happen, we’re perhaps freed to admire the subtleties of the terrific acting team and take satisfaction in noticing how pivotal scenes are expertly set up.

Universal has always done reasonably well by this masterpiece of terror. The LaserDisc and DVD editions looked very good, but the Blu-ray is even sharper, with contrast between dark and light that seems exactly right. You can enjoy in greater detail the minute twitches that enhance Anthony Perkins’s Norman Bates and delight in the horrific details of Norman’s stuffed-bird collection. The Blu-ray reveals all, including the celebrated shower scene, where the water has more texture than ever.

The soundtrack has received special treatment, sounding richer and fuller. Using new techniques, the sound engineers have constructed a 5.1 presentation from the original mono track. This process is thoroughly discussed in one of the featurettes. It’s mostly Bernard Herrmann’s masterful score for string orchestra that benefits from stereo separation and surround warmth, but there are also subtle sound-effect placements that make a great difference in the movie’s enjoyment. The people in charge here have wisely kept it subtle and not gone for any extreme surround effects so that the tracks still go well with the images on screen, but you will notice a difference in the way you react to certain parts of the film. It was already impossible to think of Psycho without Herrmann’s music, and now his score seems even more indispensible.

I mentioned three featurettes, but there are many more, as well as lobby cards, advertising art, and some of Hitchcock’s droll trailers for the movie. Universal has done well by one of its most durable films and produced an anniversary edition on Blu-ray that’s truly a cause for celebration.

Be sure to watch for: Chapter 7, with Marion Crane (Janet Leigh) driving in the rain and discovering the Bates Motel. The rain is terrifically realistic, and you’ll marvel at how the motel emerges and takes shape and focus between arcs of the wiper blades.