"Scott Pilgrim vs. The World: Level Up! Collector’s Edition" 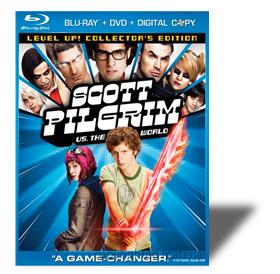 Scott Pilgrim vs. The World is a great little movie that somehow got buried with other summer films. Most of them deserved the internment but not Scott. Based on the Oni Press graphic novels of Bryan Lee O’Malley and directed by Edgar Wright, this energetic movie provides A-plus entertainment from the first frame to the last.

Having directed Shaun of the Dead and Hot Fuzz, Wright is no stranger to fantasy that is an exaggerated extension of reality. His writing smacks of cracked sensibility. And what makes his movies work is that he completely inhabits the off-center world he’s created. In Scott Pilgrim vs. The World, events happen that would seem odd if they happened in your life, but they are not at all strange in Scott’s world. The characters accept, so we accept, too.

Scott (Michael Cera) is a slacker, a 22-year-old that is "between jobs." He plays bass in a garage band called Sex Bob-Omb (a reference to the opponents in the Mario Brothers games), lives in a single room apartment with a gay roommate (Kieran Culkin), and has a 17-year-old Chinese girlfriend named Knives Chau (Ellen Wong). Then he spots Ramona Flowers (Mary Elizabeth Winstead) and falls head over heels for her. She focuses his life, and there’s only one small catch. To date Ramona, Scott must fight and defeat her seven evil exes.

The style of the movie is pure comic book. When the phone rings, you see R-R-R-I-I-I-I-N-G sprawled in letters across the screen, not to mention "POW, WHUMP," and other one-syllable exclamations during fight scenes. When characters appear for the first time, pop-ups identify them. Since Scott must defeat seven exes there are fantastic, stylized fight scenes. When each ex is dispatched, he or she transforms into showers of coins. All of the amazing post-production art is fully integrated into the movie in such a way that you feel it was always there in the original shooting.

Since there’s a band, there are other, competing bands, and lots of musical performances. The DTS-HD Master Audio tracks handle these with ease. The music rocks loud at times with subwoofer bass, but it's not overbearing. This is a surprisingly dialogue-heavy film, where characters often speak in asides or under their breath, and the skillful mix allows one to hear every word. The picture explodes with spots of color and has plenty of detail in bright and dark scenes, but I remember the colors popping even more seeing the film in a theater.

Extras are plentiful and interesting, including four commentaries and a really useful visual trivia track that lets one in on the in-jokes and references. One of the commentaries features Wright and O’Malley and it proves very instructive to have a director and source-material author discussing the changes that needed to be made in carrying the story from the printed page to film.

Scott Pilgrim vs. The World is funny, appealing, exciting, intelligent, heroic, passionate, and even, at times, heart warming. It has been brought to Blu-ray with care and imagination and deserves a wider audience than the theatrical release garnered. Don’t deny yourself its many pleasures. If you don’t have Blu-ray yet, there’s a second disc in this set that contains a DVD copy of the movie as well as a digital copy.

Be sure to watch for: At the beginning of chapter 12, we find the characters in a room that has walls plastered in Rock Band poster art. Since it involves the third evil ex, there are a lot of "3s" scattered throughout. The detail is very good. How many 3s can you count?